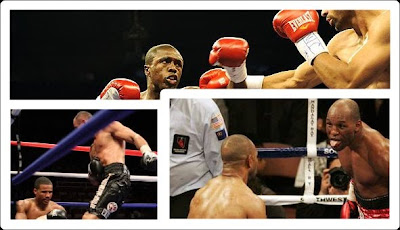 When I planned out my vacation several months ago I simply didn’t know how much boxing action I’d be missing…As much as I needed time away from the day to day grind here in my Central Mexican fortress, I would’ve put off the festivities for another date…Maybe a few weeks earlier so I could conveniently miss the Pacquiao-Clottey Crapfest…

Well, I’ve just about caught up on the action I’ve missed…So, I guess, no harm, no foul…Here’s a brief review of some of the action that took place during my swingin’ vacation:


Andre Dirrell DQ 11 over Arthur Abraham: Brilliant boxing clinic given by Dirrell over the first 9 or so and 100% validation of my opinion that Abraham is way overrated…As for the fight-ending foul: When, I first saw it casually, I was of the opinion that Dirrell was acting. When I saw it again and actually paid attention, it was clear that Dirrell was legitimately hurt and the way he reacted, by pawing at his eye, was eerily reminiscent of Gerald McClellan’s reaction after he suffered a brain injury in a bout with Nigel Benn. Plus, how could anyone watch Dirrell’s punch drunk post-fight interview and say that he was play-acting the part of a hurt fighter?

Marcos Maidana KO 6 over Victor Cayo: Whether Maidana goes on to do something at 140, there’s no doubt at this point that he belongs among the top jr. welters in the world…Cayo, on the other hand, does not.


Joan Guzman SD 12 over Ali Funeka: Guzman is in a lose-lose situation…He simply can’t (or won’t) make a weight below 147, but he will be devoured by the elite crew at 147. Unless he can find a way to motivate himself below 135, Guzman is finished. Funeka was also busted for using a diuretic to help make weight…So, what we had was two natural welterweights fighting for a lightweight title…Go figure.


Bernard Hopkins UD 12 over Roy Jones Jr.: I never thought I’d use the words “embarrassing” and “pathetic” alongside the Hopkins name, but this was a career-low for a fighter who deserves so much better. Poorly thought-out, poorly executed and just, plain tedious, this was the most cringe-worthy fight of the year so far.


David Haye TKO 9 over John Ruiz: Haye is for real…It remains to be seen whether he can hang with the Klits, but there’s no doubt at this point that Haye belongs on the main stage.


Evander Holyfield TKO 8 over Frans Botha: Sadly, with a near win over Valuev and a TKO of Botha, Holyfield has a case for continuing on with his career…

Andre Berto TKO 8 over Carlos Quintana: Yes, Berto is legit and he’s a deserving champion…shame on you if you thought otherwise.