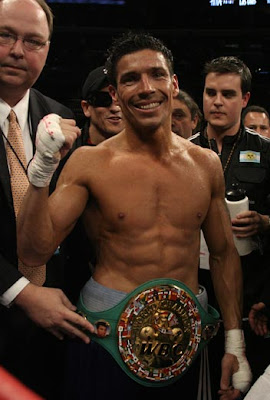 ATLANTIC CITY, N.J. — Nobody could deny Sergio Martinez the victory this time.

Martinez (45-2-2) moved up to 160 pounds to challenge Pavlik, who had never been defeated at his natural weight. The 35-year-old from Argentina put on marvelous display of speed and footwork, though, rallying from a questionable knockdown in the seventh round to batter and frustrate the pride of Youngstown, Ohio.

When the final bell sounded, Martinez immediately ran for the corner and leaped onto the ropes in victory, his promoter Lou DiBella storming into the ring. Pavlik solemnly raised his own arm, his face awash in blood — just as it been at the end of every round after the eighth.

Martinez said he knew that he had won the fight when it ended, even though the judges haven’t been kind to him the last couple of years.

He appeared to beat Kermit Cintron in February 2009, dropping his opponent in the seventh round and watching the referee count him out. But after a lengthy commotion, the fight was allowed to continue, and all Martinez was able to get out of it was a draw.

Then in December, Martinez fought feared puncher Paul Williams in the smaller ballroom at Boardwalk Hall in a Fight of the Year candidate. Both of them hit the deck in the first round and they stood toe-to-toe the rest of the way, but Williams earned the debatable decision.

No way Martinez was going to let it happen again.

He moved around the outside of the ring like a hornet from the beginning, dashing in to sting Pavlik (36-2) before moving away from the champion’s punishing right hand.

Pavlik appeared to make his move in the middle rounds, finally starting to catch Martinez with a couple of hard shots that left the challenger off balance. A short right sent Martinez to the floor with about 90 seconds left in the seventh round, but he claimed that it was a slip and never appeared to be seriously hurt.

That much was obvious by the ninth round, when the momentum swung back to Martinez. He opened a heavy cut over Pavlik’s right eye that turned his face crimson by the end of every round, and Martinez was on cruise control after that. He kept out of the way of a knockout blow in the final round, the only thing that could have sent the titles back to Youngstown again.

Pavlik’s corner said that he would need at least a dozen stitches to close the cut.

Much has changed since Pavlik last stepped foot on the boardwalk, when he was embarrassed by slick veteran Bernard Hopkins in a non-title fight in October 2008.

Back then, thousands fans made the trip from Youngstown to cheer on their favorite son, the next great middleweight. He was feted everywhere he went, throwing out the first pitch for the Cleveland Indians and showing up in magazine and newspaper spreads on a regular basis.

Then he contracted a staph infection on the knuckle of his left hand that threatened his career, if not his life, and caused him to back out of a fight against Williams last fall.

His only title defenses last year, against overmatched and undersized Marco Antonio Rubio and Miguel Espino, took place in his hometown — far removed from the glaring spotlight that had once shone so brightly. Rumors began to circulate that Pavlik was an alcoholic or having other personal problems, and many of his fans began to turn their back to him.

Boardwalk Hall was still heavily in his corner Saturday night, but Pavlik acknowledged before the fight that merely winning might not be enough to earn back everyone who abandoned him. He needed to win the fight convincingly, perhaps by knockout.

In the end, Martinez was the one who nearly finished the fight early….

Early in the third, Miranda mocked Bute and dared the Montreal fighter to give his best shot to the body. Bute then had the Colombian scrambling with a flurry of punches, stopped for a second to grin at his opponent, then finished him off with a combination.

Miranda got up, but was still wobbly and the fight was stopped.