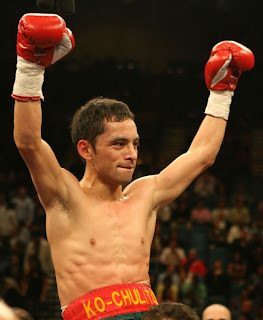 WBO Bantamweight champ, Fernando Montiel, got his career back on the fast track by scoring a TKO over reigning WBC champ, Hozumi Hasegawa in Hasegawa’s hometown of Tokyo, Japan.

After a dead-even first round, Montiel came on to have a solid second, followed by a Hasegawa-controlled third.

The fourth round was mostly Hasegawa’s until Montiel landed a pair of left hooks at the end of the round that shook the Japanese world champion. Hasegawa was stunned and essentially defenseless, with one hand draped over the ring rope and Montiel landing at will.

Referee Laurence Cole stepped in and waved off the bout with just a couple of seconds left in the round. The stoppage was quick for some tastes, but it was obvious that Hasegawa was in bad shape and Montiel could’ve inflicted some real damage.