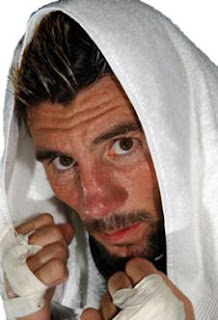 BTBC: I’ve considered you to be the “Most Avoided Man In Boxing” for a while. How does a former world champion and Olympic medalist with 7 losses avoid work? It seems like prospects would want to test their abilities against somebody who would look good on a resume.

Wayne McCullough: The problem is that I’ve never been on the canvas so anyone that steps in the ring with me knows they’re in for a long night!

BTBC: Some people don’t think you should fight anymore, they look at the record of your previous outing and it says “RTD”. What happened?

WM: Prior to the fight I got injured in sparring. I asked the promoter to let me postpone the fight but he refused. My wife wanted to pull me out but I thought it could have been my last chance so I took the fight. No disrespect to Juan Ruiz but I should not have been in the ring that night and even though I was ahead on the cards my injury flared up and I had to stop after the 6th round. But I didn’t make excuses after the fight!

BTBC: How hard has it been to get a bout? Tell us about some of the frustrations you’ve had.

WM: Cheryl (Cheryl McCullough, wife) has asked lots of promoters if they would give help me get a fight. I was even willing to sign a deal. But nothing materialized.

BTBC: How did this Prizefighter (UK-Based One-Day Tourney) opportunity come about?

WM: I was approached by the promoters people and I jumped at the chance. He is using my name but it means I get to fight so I’m happy about it.

BTBC: Some people think that a long layoff like yours hurts your chances, what have you done to keep your abilities sharp?
WM: I kept training even when there wasn’t a fight to train for. I just continued to work on my craft and focused knowing that if I was meant to fight something would come along.

BTBC: A lot of our readers are boxing purists who would rather die than watch MMA; But MMA has given you some opportunities, tell us a little about how it has helped you out.

WM: I’ve known Dana White for many years and about 4 years ago I got tickets through Marc Ratner to attend a live UFC event in Las Vegas. It’s unheard of to be invited to attend a boxing event so I was thrilled. That night Dana approached me and asked if I’d come work for them and I said I’d be honored. I’m very thankful to Dana, Lorenzo & Frank Fertitta because my position in the UFC has secured my future. I have given more than most to boxing but I never thought it would turn it’s back on me.

BTBC: Can you tell us about who your opposition will be in the tournament and give us an idea of what we can expect from you?

WM: There is a former European champion taking part and another 6 British fighters as well as me making a total of 8 boxers in the tournament. An injury free Pocket Rocket can walk away with the Prizefighter trophy!

BTBC: Let’s say my dream match of you vs. Penalosa happened, how would you see that playing out (two strong chinned volume punchers)?
WM: I like the way Penalosa fights. I’ve asked for that fight but yet again I was ignored! It would be a great fight that I would win but I could see it becoming a trilogy like Ward v Gatti!

BTBC: Will Cheryl be working with you in getting prepared?

WM: Always does, always will!

BTBC: Any final words for your fans and well-wishers on The BTBC?

WM: I want to thank all my true fans who have supported me throughout my career!