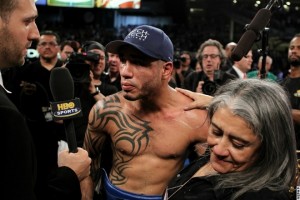 Body Blow podcast host, Lance Williams, spoke for many fight fans when he started up a thread entitled, “What’s Next for Cotto?” on The BTBC Fan Forum. The truth is that even Cotto’s biggest fans have to question Cotto’s next move after walking through an overmatched, eventually one-legged, Yuri Foreman at Yankee Stadium.

Miguel Cotto vs. Alfredo Angulo in  fair-play Cotto vs. Margarito action. Cotto-Angulo would be an instant classic and a treat for all fight fans. Win, lose or draw, the next stop would be back down to 147 and a bout with Andre Berto to pass the torch that Berto hasn’t been able to attain by beating guys like Collazo and Quintana. Then, if there’s something still in the tank, a farewell rematch with Shane Mosley would be well-received by all.

Miguel Cotto has to look for money fights as he starts enter the final stages of a long, taxing career. He also has to walk the line between  tough, high profile fights and winnable fights that pay well. The winner of the upcoming Cory Spinks-Cornelius Bundrage bout would be ideal. Spinks doesn’t have the power to hurt Cotto and is showing signs that his legs aren’t what they used to be; Bundrage is just not skilled or quick enough to beat Cotto should he get by Spinks.

After that bout, there is a plethora of interim, silver and regular titles to be won back at 147. This may mean Cotto fighting some fringe Euro-welter, but it’ll mean another title for Cotto and at least one more payday for a guy who’s given his all to the sport.

Look at the WBA’s Jr. Middleweight rankings and you’ll see what Top Rank has in mind for Cotto. Somehow, Top Rank “convinced” the WBA to make Antonio Margarito the #1 contender for Cotto’s newly acquired title. Cotto vs. Margarito II at a packed Azteca Stadium in Mexico City would be a huge money generator and yet another likely indignity suffered by Cotto under the “guidance” of Arum and Top Rank.

The champion from Caguas, Puerto Rico has been forced down a truly tough path to stardom and has always managed to give honest, heart-felt performances…Whichever path Cotto takes, let’s hope for a safe one…