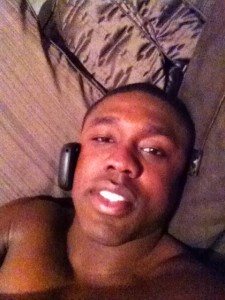 ecific promoters, managers, or fighters. As a result, interviews have been extremely hard to come by. When we get the chance to conduct them, we are fair and, I believe, entertaining (Click HERE for some examples)…However, it is not in our editorial disposition to jump through hoops or beg for the opportunity to steal 15 minutes of Twitter time from some pampered athlete.

But fans do like reading interviews, so we are beginning a brand new feature which will use the wonderful world of Twitter to help us assemble a facsimile of what an interview with that boxer would be like…if we were granted the royal privilege of an audience, of course. All athlete responses are direct, unchanged Twitter quotes from the named boxer, rearranged to fit our bogus questions. (By the way, the dreamy photo of Berto is also from his Twitter account)

We would be very pleased to some day actually conduct real interviews with these people, but this will have to do for now:

The Boxing Tribune: Thanks for taking this imaginary time to talk with us, Champ. What have you been up to?:

Andre Berto, Twit: Damn… Just woke up from a most needed nap. Had a dream I was trapped in a room wit Jay Z and Warren Buffet. And the business converstaions we had were life changing. now time to head back to the gym. Passion bleeds success. Pain is temporary but the reward will be forever. Let Go

AB: So how about u guys can ask me anything I’ll pick the best ?’s and answer 100 percent hosnest. Let’s Go!! This ya chance

BT: Ok, You have a fight with Freddy Hernandez coming up on November 27th. How do you answer the critics that say Hernandez may be too much of a soft touch at this point in your career?

BT: So…by, “doing nothing” are you referring to your fight schedule?

AB: Yup. Iam about to reach my dreams and I don’t even have my arms stretched

BT: Speaking of outstretched arms…How do you answer those critics who claim that your fights are often characterized by excessive holding?

AB: U may see fear in my eyes but I won’t be able to recognize it because iam to busy sprinting toward it

BT: Ok, but has that clinching sort of diminished the excitement level of some of your fights? Your last fight, in your own home state by the way, only drew 972 paying fans.

AB: You can’t climb with your hands out, nor can you climb with them in your pockets.

AB: In deed my mama raised me to be a boss from birth.

BT: Ok, well…let’s change the subject. I hear that you’re quite the video game player.

AB: yea Iam a PS3 vet. So whoever want it come see me. I hear my big brother @thegame is suppose to be serious on Madden but talk is cheap

AB: Watching the show ” Scare Tactics” wit the boys at the crib about to pass out from laughing so hard lol MAN!!!! (tears in my eyes) lol

BT: And what about this friendship you’ve developed with Justin Beiber?

AB: Smh lol this lil boy has lil 12 year old girl fainting all over the place.. Just passing the hell out shit is crazy

BT: I know that you’re big on dishing out homegrown philosophy to your Twitter followers…Do you have any gems for our readers?

AB: Yup. The best way to know if u have just ask yourself if u quick whatever your doin Job ect today And still be happy then that’s not ya purpose

BT: Sorry, I didn’t quite get that. You are way over my head.

AB: Thinking so far outside my box my box becomes I now I have to think outside of me.

BT: I guess. Any closing thoughts on your upcoming fight?

BT: Thanks for virtually taking the time to talk to us.