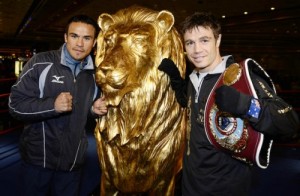 Sometimes boxing can be the most irritating sport on earth. Fighters ducking each other. Promoters refusing to work with each other. TV networks rejecting the fights hardcore fans want to see because the fighters don’t have enough star quality. Instead, they force feed us tripe and tell us to enjoy it. They tell us this is who the stars of boxing are, this is who we should be watching. They tell us it doesn’t matter what we want, they know best– after all they run the game and we don’t.

Then, once in a while, the sport turns itself around and gives us a great fight. It gives us a fight the fans have been demanding for over a year. It delivers a fight in which you know there will not be a dull round let alone a dull minute. A fight which you know, before it happens, you will be telling your grandchildren about.

This fight is of course Juan Manuel Marquez vs. Michael Katsidis for the Undisputed Lightweight Championship of the world.

Both fighters are true gentlemen outside of the ring, you will be hard pressed to find a boxer as genuine as either of these fighters. They have a genuine love of the sport and a genuine understanding of what the fans want. What makes both of them particularly special is they always try to put on a show and so far, they have never failed.

Michael Katsidis is mainly known to hardcore fans as the heir apparent to Arturo Gatti. The Australian slugger’s bouts with Graham Earl and Czar Amonsot have become forgotten classics, getting better with each viewing.

Juan Manuel Marquez was in the same situation as Katsidis is in now, back in the early part of the decade. Known only to hardcore fans and the victim of Boxing Politics. Now, however, after two wars with Manny Pacquiao, a fight of the year with Juan Diaz and a mega fight with Mayweather, he has crossed over into the mainstream boxing publics eye.

Marquez has the perfect platform to create a public demand for a third fight with Pacquiao. An exciting fight with Katsidis may make Marquez the most financially appealing opponent out there for Manny. This is where the drama of this fight lies.

It is quite possible that Marquez is completely overlooking Katsidis. Richard Schaefer is already openly discussing his next opponent. GBP is merely looking at Katsidis as a stepping stone, a mere inconvenience to their grand plans.

Katsidis should never be taken lightly. He is a Warrior in every sense of the word. Despite his brother passing away, Katsidis refused to leave camp. We have seen what fighters with this type of motivation can achieve. Bear in mind that Katsidis is one of the hardest punchers in the division and also the most relentless pressure fighter in the division… and we have the recipe for the fight of the year.

Aside from the Mayweather fight, JMM has shown an uncanny ability to avoid shots while in close range in the later stage of his career. He has also become a master of making subtle adjustments during a fight. His uppercuts have become lethal of late and its that punch he is going to need in order to beat Katsidis who has shown himself vulnerable to them in the past.

It is imperative that Marquez concentrates 100% on his defence in this fight, he can not get into exchanges with the naturally bigger and stronger Katsidis. He has to box and move. If he gets involved in a brawl it could spell the end of his title reign.

Katsidis on the other hand, has to force the issue from the first bell- He must get to Marquez early and force the fight. He can not allow Marquez to dictate the pace, he has to get past the jab, his bob and weave style of getting inside is perhaps his most important tool going into this fight.

You can analyse the styles, previous opposition, where both sit in the mythical P4P rankings but, in this fight, there simply is no point. This is one of those fights where it truly does not matter what either of them has done up to this point. While there is quite an age gap it would be silly to assume JMM will get old overnight; we have been expecting him to get old since 2005 and he has not shown any signs of slowing down yet. Mayweather fight aside, JMM has made a habit of getting stronger as a fight goes on.

All in all as fighters they match up so well, we can expect nothing but fireworks in the ring and respect from both fighters after it.

There is no loser in this fight. The winners will not be the fighters– the fans are the real winners here. We have two fighters who want nothing more than to put on a show. Also, shocker of all shockers, there is a genuine world title on the line and the guy who is challenging actually deserves his shot.

For once, the Boxing Gods have smiled upon us. Now it is up to us to embrace them.

Michael Katsidis: “Marquez is Mine!”

Boxing Gets Back to Business