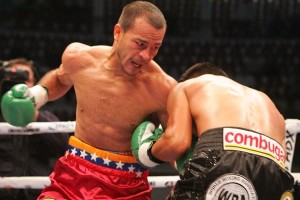 Cermeño, who failed to upset WBA bantamweight champ, Anselmo Moreno, in two back to back close split decision, is coming off a November first round TKO of 8-0 Hugo Berrio in Panama.

Terrazas has scored three consecutive TKO victories over sub-par opposition following his ninth round TKO loss to Brit, Rendall Munroe, in April of 2010.