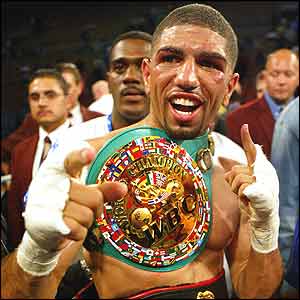 After two years of inactivity, former 3-belt jr. middleweight champ, Ronald “Winky” Wright (51-5-1, 25 KOs) is set to return to the ring on April 9th against the UK’s Matthew Macklin (28-2, 19 KOs) in a middleweight contest. The bout will serve as chief support to the Juan Manuel Marquez-Erik Morales main event on pay-per-view in Las Vegas.

In Wright’s last contest, in April of 2009, the 39-year old southpaw dropped a one-sided unanimous decision to Paul Williams at the middleweight limit. At the time of that fight, he was coming off another two years of inactivity after a unanimous decision loss to Bernard Hopkins in a 2007 light heavyweight contest.

In Wright’s 19 year career, he boasts wins over the likes of Shane Mosley, Felix Trinidad, Bronco McKart, and Ike Quartey.

The 28-year old Macklin, ranked #6 in The Boxing Tribune’s middleweight rankings, has only fought twice outside of the British Isles and has faced a limited level of opposition, with wins over Wayne Elcock, Amin Asikainen, and Yori Boy Campas being the most impressive on his resume.