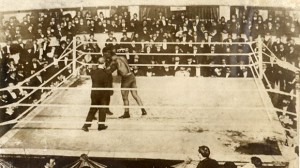 I used to be fight fan. Once upon a time I was a simple boxing addict that scanned the TV guide for boxing broadcasts (some of you younger guys won’t believe this, but the TV line up used to be in printed form), set the VCR (my fellow old timers know of this now obscure device), and settle in with a six pack and few bags of chips. I’d enjoy whatever fight was on, and take whatever “facts” thrown at me by the broadcast team as gospel. It was a happy time.

Things are different nowadays, for me anyway. The age of the internet has brought us so many avenues to previously unknown information that it’s damn near impossible to just sit and enjoy a fight anymore. There’s always some side angle as to how the fight got made, why fighter “A” has no business being in the ring with fighter “B”, and why the title isn’t legit…or is it? If you really want to ruin things for yourself, do a little more research and see how the so called legend you’re watching has a padded record, or how your favorite undefeated fighter has been feasting on bums all along. Damn, you could really hit a skid of depression knowing such things.

You could always turn a blind eye and go the way of the dreaded “casual” fight fan. You know the type: they still think Mike Tyson was the greatest heavyweight ever, don’t realize Evander Holyfield is almost 50, and believe Dana White when he says MMA is a bigger draw than boxing.

So, while it may appear that having access to all the knowledge has ruined boxing for me, it really hasn’t. While it’s definitely altered my perception of the sport on so many levels, educating myself on the politics and behind the scenes dealings has actually given me more appreciation for the fighters.

While appreciation won’t pay the bills, using independent news sites like The Boxing Tribune to expose unfair and plain bull$hit practices by promoters, management teams and sanctioning bodies is a step in the right direction to cleaning up the sport and making things right, or as right as they can be. It’s also a good avenue to give credit where credit is due, just as we blast those who are screwing the public and the fighters alike, it’s always a good feeling to give a good account to someone who deserves it (and even better to baffle the pro-MMA crowd with buy rates and attendance stats when they start chirping).

Just as any person can be happily married to a cheating spouse if they’re ignorant of the extra-marital activities of their significant other, we can all be the dopey-yet-happy fight fans who buy everything the broadcast teams sell us on fight night. On the other hand, we can choose to educate ourselves, be out spoken , and occasionally be pissed off at the politics of the sweet science, but know in the end that you’ll have a greater appreciation for the good things that happen and take pride in knowing that you know just a little more than the guy in the bar watching the fight next to you.