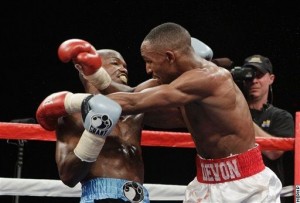 It’s easy to blame boxing’s substantial problems on greedy promoters, crooked governing bodies, clueless TV networks, and a mainstream media full of shills and self-congratulatory egomaniacs. There are valid points to be made against all of these offenders.

The biggest culprit, though, may be none other than the very amateur system that is supposed to take talented young athletes and mold them into fighters. If you’re looking to point a finger at one thing that is doing the most damage to the modern, new millennium version of big-time professional prize fighting, you need not look any further than the way our best and brightest get brought up and educated in the art of combat.

In 1992, after several judging controversies in international bouts, the decision was made to adopt a computerized scoring system in all officially sanctioned amateur bouts. The change, ostensibly instituted to bring uniformity and fairness to amateur boxing, has completely altered the way young fighters are being developed.

Under this system, fighters are awarded points based on how many clean blows they land with the white knuckle surface of their glove against the scoring areas of an opponent (middle of the head, down the sides and between the hips through the belly button). Points are given based on whether 3 of the 5 judges press a button, recognizing a clean punch, within a one-second window.

Under the current system, emphasis is put on scoring quick, rapid-fire punches and, since inside body work often gets obscured in the trenches of battle, a greater importance has been placed on being able to land those flicking, long-range shots from the outside.

The inside game, a staple of any world class fighter’s repertoire, has been diminished greatly under the new amateur scoring system because, frankly, it’s much harder to see a flurry of three or four inside shots in the heat of a toe to toe battle than it is to see a long right hand from the outside, or a slapping combination from a judge-friendly distance. Inside work, as many in the amateur scene will acknowledge, just doesn’t generate points the way the outside work does.

Amateur fighters interested in titles, as well as their trainers, have developed the “score first” mentality of fighting since, after all, a quick flick counts the same as a well-thrown left hook. Actually, investing too much into punches works as a hindrance, since that sort of investment takes time, requires proper positioning, and would likely put the fighter into a position where they are four or five points behind before the action even gets heated.

When one fighter has flicked his way to a sizable lead, the best bet, then, is to avoid any and all action so his opponent doesn’t have a chance to score.

“It’s all touch, touch, touch,” said trainer Antonio Aguilar of the Gymnasio Miguel Castro in Ciudad Hidalgo, Michoacan, an old-school Mexican gym where inside fighting drills are a mandatory and bloody necessity. “They don’t show these kids how to plant their feet and really punch. The United States has the best athletes in the world with the most money to train them…and they’re taking these strong kids and making them weak.”

Most hardcore fans have noticed the change in the stereotypical American fighter. Whether it was a defensive wizard like Pernell Whitaker or a killer like Tommy Hearns, what they all had in common was a well-rounded amateur education, very distinct from the one available now.

The current crop of elite American fighters, the first generation raised from child to adult under the new amateur system, reads like a who’s who of under-developed talents.

Fighters like Andre Berto, Andre Ward, Devon Alexander and Andre Dirrell are all world class fighters and highly decorated amateurs who have worked their way to the top of the sport based, mostly, on superior physical tools. But all of these fighters have bad habits that, honestly, would not have existed in previous times, especially among fighters with so much amateur experience.

Fighters like Berto and Ward have become clinch machines based, mostly, on the fact that once they work their way inside, they find themselves in very awkward positions. Unable to really throw punches or leverage themselves into anything within an extended arm’s reach, they simply get tangled up with their opponent and/or lock arms and wait for the break to get back on the outside. Their solution to getting into a toe to toe inside battle is simply to hold on and nullify the other guy by pinning his arms down.

While it wins them fights, the fans suffer. A clinch-filled fight is like watching the Indianapolis 500 with a speed bump every 25 feet.

Dirrell, on the other hand, does everything from the outside and gets a look of panic whenever an opponent gets close enough to hit him. Also, hardly a fan-friendly style for an athlete whose ability suggests names like Roy Jones or Michael Nunn.

Devon Alexander, in the biggest fight of his career last Saturday night, displayed every bad habit forged under the current amateur system. He flicked meaningless punches, tangled himself up in clinches when the action got close, and fought with the mindset of someone looking to hurt Timothy Bradley’s feelings more than actually hurt Timothy Bradley.

And how can we blame him? This is the fighter he was raised to be. If nobody taught Alexander how to fight like a professional, it’s hard to say that he should be expected to fight like one.

“A lot of jabbing and arm punching. A lot of running just to not get hit,” Aguilar continued while some poor novice kid was getting his lip split from repeated inside uppercuts behind us. “What happens when he fights a real warrior who knows how to cut off a ring and knows that sometimes you have to get hit in order to counter? Ten, Twenty years fighting, ribbons and medals from tournaments, an undefeated professional, sometimes a world title– And you still have to wonder what will happen when they get hit? It’s a joke.”

Compare Alexander’s performance last Saturday to someone like Juan Manuel Marquez, and the joke becomes quite twisted indeed.

Given that four of the top five pound for pound boxers in the world had limited amateur experience (none under the new system) and the fifth, Floyd Mayweather Jr., got most of his education under uncle Roger, it’s safe to say that the School of Hard Knocks is proving to be more beneficial than an amateur pedigree these days.

One of the keys to getting the American boxing scene back at full speed is to develop these awesome talents into real fighters with complete skill sets once again. If that means moving the kids out of the amateur system and into the few sweaty, stinky, blood-spattered old-school gyms remaining, then so be it.