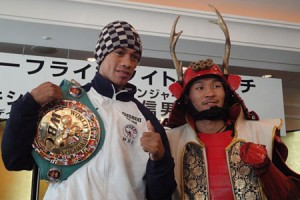 by The Boxing Tribune

Nobuo Nashiro (14-2-1, 9 KOs) vs. Tomas Rojas (34-12-1, 23 KOs), a WBC super flyweight title bout between two of the division’s best, is an interesting match-up of two fighters who are arriving at the same place, but have taken very different paths to get there.

While Japan’s Nashiro was cutting to the front of the professional line and winning his first world title (vs. Martin Castillo) in only his eighth bout as a pro, Rojas, of Veracruz, Mexico, was coming up the hard way, learning his craft on the Mexican club circuit and losing five of his first eighteen.

Now, they will meet in Osaka, Japan on February 5th, as two world class fighters at the same level and at a similar point in their careers. Both, at or near 30 years of age, the victory on Saturday means maintaining what they have fought to acquire. A loss means going back a few notches and starting that hard road to glory once again, but at a time and an age where the end is clearly in sight.

While Rojas is the defending WBC 115 lb. champ in this contest, both have real experience at the world class level and both bring similar drive and ability to the bout.

The southpaw WBC super flyweight champ, Rojas, at 5 ft 8 and with a nearly 70 inch reach, is long and lean for a 115 pounder. He’s also the more mobile, more athletic fighter in this contest.

He’s most effective when throwing up the middle, especially a very sweet uppercut that, because of his size, allows him to generate good leverage. Unfortunately, Rojas has a tendency to wing wide punches from the outside in the heat of battle, leaving himself open and vulnerable for counters.

Another issue that has popped up recently is regarding Rojas’ chin and physical durability, which has been put into question in two of his last four outings (against Kohei Kono, where he was hurt late in the title-winning contest, and against Vic Darchinyan, where he was blown away in two rounds.)

Nashiro, at a touch over 5 ft 4, is short and compact and far less athletic than his rival. He is flat-footed with virtually no mobility, but makes up for his clumsiness from the waist down with good timing and very strong conditioning.

Although patient, Nashiro likes to engage and can be lured easily into a back and forth exchange. He has considerable lapses in defense and can (and WILL) be hit with good shots against everyone he meets. He is especially vulnerable to uppercuts and punches thrown straight up the middle.

Offensively, he has solid, but not spectacular power with a very strong work ethic when it comes to work rate. His best punches are a strong, straight right hand and looping left, thrown three-quarters over the top, that he launches as a surprise attack.

Rojas has been educated at the school of hard knocks, losing to much more experienced opposition earlier in his career.

Recently, Rojas has put on some solid and mature performances against Kohei Kono (where he won his current belt) and Evans Mbamba as well as some dominating bouts against marginal opposition. In that same time frame, though, he’s been blown away by Vic Darchinyan.

Prior to his emergence as fringe- world class fighter, Rojas had established a high level of opposition, but had lost to most of his world class foes, including Anselmo Moreno, Jorge Arce, Gerry Penalosa, Cristian Mijares and Luis Maldonado.

The 29-year old Nashiro, on the other hand, has fought an overall lesser level of opposition, but has been successful throughout his career, going 1-1 against Hugo Cazares (to whom he most recently dropped his own world title) as well as holding victories over Kohei Kono, Alexander Muñoz, and Martin Castillo in just seventeen professional fights.

Rojas has the tools to beat Nashiro and, in some areas, has the precise ability and skill set to defeat the Japanese star. However, lapses in concentration and technique make him ultimately vulnerable, especially to a patient stalker like Nashiro.

At some point, Nashiro will land the southpaw’s nemesis straight right hand and/or catch Rojas with the overhand left. Then, the fight will turn into a war. Nashiro, given his skill-set, disposition, and history is better-equipped for a war.

Prediction: Nobuo Nashiro via stoppage, possibly in the area of rounds 8-10.

*This bout will not be aired in the US, but for info on how to watch this non-televised contest live, stay tuned to The BTBC forum. Links will be made available in the members-only “Links and Streams” section (Registration is free and easy.)