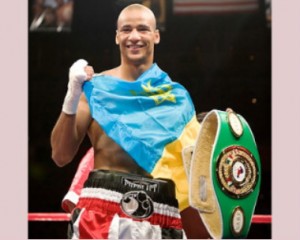 Over ten relatively one-sided rounds Sillakh constantly beat his opponent to the punch and pretty much dictated the pace throughout the defense of his NABF light heavyweight title.

Despaigne was dropped and busted up by a straight right hand at the end of the second round and never managed to get on track after that. Judges scorecards were all in favor of Sillakh: 98-91, 98-91, 99-90. The Boxing Tribune also scored the contest 99-90.

On the televised undercard, Ghana’s Ray Narh (25-1, 21 KOs) beat 41-year old former featherweight world champ, Freddie Norwood (43-4-1, 23 KOs) via 10-round unanimous decision in a welterweight contest. Judges’ scorecards were 99-89, 100-88, 100-88. The Boxing Tribune agreed, scoring the contest 100-88 as well. Norwood was deducted two points in the ninth round for intentionally hitting Narh behind the head.

Escobedo simply outworked the game, but overmatched Estrada, dropping the veteran in the sixth round. Escobedo would also suffer a deep gash in the eighth which may keep him out of action for awhile.