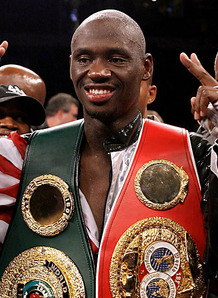 Former light heavyweight champion of the world, Antonio Tarver (28-6, 19 KOs), will be fighting Australia’s, Danny Green July 20th, in Sydney, Australia in his debut bout at the cruiserweight limit.

Tarver last fought as a heavyweight, scoring a sluggish unanimous decision win over Nagy Aguilera in October of last year. He’s also been seen as a color commentator at Showtime for the last several televised cards.

The 42-year old Tarver is best known for his run at 175 lbs., where he held both the WBC and IBF world titles on separate occasions. He has also scored wins over a veritable who’s who of the light heavyweight division, including Glen Johnson, Montell Griffin, Clinton Woods and two high-profile wins over Roy Jones Jr., the first of which via frightening second round KO. The Tampa, Florida resident, who didn’t start his pro career until he was 29, has also been handed defeat by guys such as Bernard Hopkins, Johnson, Jones, and, on two occasions, Chad Dawson.

Danny Green’s (31-3, 27 KOs) last contest was a unanimous decision victory over BJ Flores in November of last year. Shortly after, he underwent abdominal surgery that, at the time, was thought to be career-threatening. Perth’s Green also holds a first round KO of Roy Jones Jr. in 2009.