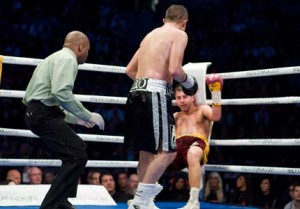 As expected, Montreal’s hometown hero, Lemieux, charged his veteran opponent, looking for an early ending to the contest. However, Rubio worked defense, blocking much of Lemieux’s offense and letting his younger rival blow through his enthusiasm and endurance before really going to work.

Around the fourth round, Rubio started landing a solid straight right hand and jab, bloodying Lemieux’s nose and causing a hush among the partisan, pro-Lemieux crowd at the Bell Centre.

The beginning of the end came in the final moments of the sixth round when Lemieux was clearly stunned from a couple of strong, straight right hands by the suddenly offense-minded Rubio.

The actual end came in the second half of the seventh round when a Rubio right hand behind the ear leveled his opponent in the corner and, although Lemieux managed to get to his feet, he clearly didn’t have steady enough legs or a clear enough head to finish.

Lemieux’s corner would wave off the contest at the 2:36 mark of the round to save their fighter from more punishment.

Rubio is now in line to face the winner of the Julio Cesar Chavez Jr. – Sebastian Zbik WBC middleweight title fight in June.

Harris had no answer for Vargas’ offense and merely ate a lot of shots to the body and the head, barely making it out of the first round. Harris, himself, wisely opted not to go out for the second round.

This is Harris’ third straight stoppage loss and the fourth in his last five official contests. Hopefully, the native of Guyana and resident of Brooklyn, NY will finally call it a career and promoter, Golden Boy will stop using the former 140-lb champ to beef up the resumes of their prospects.