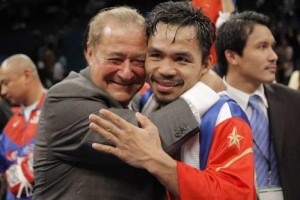 The sport of Boxing is directly dependent on the viewers, yet it routinely fails to deliver what they want to see on pay per view. It has been about 2 years since the public began to clamor for the megafight between Mayweather and Pacquiao and still nothing. The public has blamed both fighters for not making the fight; however, it appears that the true culprit is Bob Arum himself.

Why should we blame Arum? Because he likes to double end his deals. Since Manny has beaten Hatton, he has only fought Top Rank fighters: Clottey, Cotto, and Margarito. Furthermore, the only way a Manny Pacquaio vs. Marquez rematch would be possible is if Golden Boy is not involved.

Recently, Bob Arum said, “”But I’ve got a guy, meaning Manny, who plans on fighting five more times and I’ve got to have guys who can give him hard fights. Cintron is one of those guys.” Why would Arum make this fight considering that it appears that both Manny and Floyd have recently made public comments hinting toward a possible fight within the next 6 months? Perhaps the only reason the fight will not get signed is because either Arum wants to protect his cash cow or he wants to compel Floyd to sign with him in order to make the fight a reality.

However, Mayweather also deserves some blame as well as there are indications that he allegedly wants to fight Paul Spadafora on a major pay per view event in the upcoming months. For those not in the know there is a YouTube video in which Spadafora works a young and poorly conditioned Floyd in a brutal sparring session to the point that an exhausted Floyd lays on the ring mat gasping for air. This fight lacks relevance as Spadafora, since coming out of prison, has made virtually no impact on the sport.

Furthermore, the drama surrounding the Pacquaio and Mayweather fight has both hurt the sport and the fans as virtually every forum thread regarding the fight has led to extensive trolling—with some comments bordering on racism. Consequently, the hype machines and rumor mills have led to the creation of a toxic climate that has caused some of the best fans to become jaded and leave the sport.

Though what is happening could summed up as “business as usual”, in actuality boxing’s failure to make this fight happen while routinely churning out expensive pay per view fights that have no relevance on the sport is a sign that boxing promoters take fans for granted and have no respect for the sport.

So what can boxing fans do to force the fight that everyone is asking for? They could start by boycotting both the Pacquaio vs. Mosley and Mayweather vs. Spadafora fights respectively. Furthermore, they could go on boxing forums and voice their displeasure about the upcoming fights. Last of all the sports aficionados could communicate their extreme displeasure at articles that seem to tow the line, as it seems that most boxing writers tacitly cooperate with promoters.