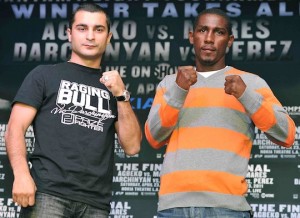 The third-place match of Showtime’s four-man bantamweight tournament, featuring Vic Darchinyan (35-3-1, 27 KO) and Yonnhy Perez (20-1-1, 14 KO), was originally intended to serve as a warm up to the tournament’s final. After IBF bantamweight titlist Joseph Agbeko’s sudden back injury forced the cancellation of his tournament championship bout with Abner Mares, Darchinyan and Perez will be headlining the Showtime Championship Boxing telecast.

Unofficially billed as a consolation fight between the losers of the first round matchups, Perez and Darchinyan are both well aware of what hangs in the balance on Saturday night.

With a win over journeyman Eric Barcelona sandwiched between a non-tournament loss to Joseph Agbeko in July of 2009, and December’s split decision tournament loss to Abner Mares, Vic “Raging Bull” Darchinyan’s bantamweight future is on the line.

Despite an inexplicable #8 ranking by Ring Magazine, a loss for Darchinyan, now 35 years of age, should drop him from relevance in the division. Ranked at #20 by The Boxing Tribune, Darchinyan’s 1-2 (0 KO) record in the bantamweight division will make justification of future fights against the best in the division that much more difficult, given a third loss. Name and past accolades will be the last bastion of the ever-confident Armenian.

Holding true to his reputation, Darchinyan comes in to tomorrow’s bout supremely confident and dismissive of the grim prospect before him. Despite his obvious inability to carry his vaunted knockout power up in weight, he is promising a knockout over the rugged Yonnhy Perez.

Perez has remained unfazed by the confident posturing of the former flyweight and super flyweight champion. For the former Columbian soldier who now fights to provide a better life for his wife and two children in Colombia, Darchinyan is another in a long line of must-win fights.

After suffering his first professional defeat in last December’s first round bout with Agbeko, Yonnhy Perez has his sights set on returning to championship form. While Perez is 32 years of age, the late start to his boxing career has kept his mileage low, leaving his chances at rebounding greater than that of his brash counterpart.

As we see often in boxing, under-the-radar bangers like Perez are forced to take longer comeback trails than their flashier, more marketable brethren, when saddled with clusters of losses on the big stage.

After April’s memorable run of slugfests, upsets, and zeros that were forced to go, an untimely sciatica injury to Agbeko has taken a lot of the bang out of the April 23rd show. The two men forced to the top of the marquee, Darchinyan and Perez, will conduct business as usual.

A hard-charging, bad-intentioned southpaw will meet up with a rugged slugger that rarely takes a backwards step in the ring. Each fighter’s style complements the other well, and most are expecting an exciting result. Neither man will back down from the other.

Officially, 3rd place in Showtime’s bantamweight tournament is on the line. Unofficially, and most importantly, bantamweight relevance will be in the grasp of Saturday’s winner.