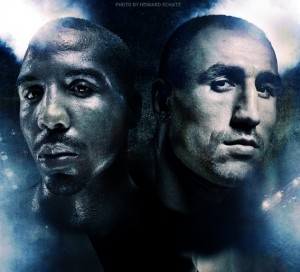 When Andre “S.O.G.” Ward (23-0, 13 KO) and “King” Arthur Abraham (32-2, 26 KO) entered Showtime’s Super Six World Boxing Classic, they played opposite roles. Abraham was named as one of the favorites coming in, and looked to be the heavy favorite after his sensational knockout victory over Jermain Taylor in the tournament’s opening round. Ward was a heavy underdog coming in. Lacking the experience of his competition, Ward faced a long road to the top of the mountain.

The Armenian-born Arthur Abraham’s reputation grew as a middleweight, as he feasted on fringe contenders in his adopted home nation of Germany. He hid behind his guard as he patiently stalked his overmatched prey, breaking them down and scoring KO victories in his first 14 professional bouts, and 25 of 29 coming into the tournament.

“King” Arthur lost some of the shine in his crown after his move up to super middleweight, when he was thoroughly out-boxed by Andre Dirrell in his Group Stage 2 bout. Over the course of 10 scored rounds, ringside judges saw Abraham winning no more than 3 rounds, as he wildly flailed away at a mobile Dirrell. Abraham lost his composure and the fight in the 11th round, as he hit Dirrell while he was down, after Dirrell slipped to one knee in Abraham’s corner.

Group Stage 3 further eroded the legacy of “King” Arthur. After 12 one-sided rounds dominated by Carl Froch, 2 ringside judges scored the bout a shutout in favor of Froch, while Burt Clements gave 1 round to Abraham. The once supremely confident Abraham fought without the same ferocity he was once famous for. Carl Froch, whom many thought to be a limited brawler, took a page from Andre Dirrell’s book, and incorporated slick boxing into his game plan. Abraham was never able to get into a rhythm and jump start his offense. Many who saw the fight saw a lack of confidence in Abraham.

Abraham needed a win to help restore his confidence going into the tournament’s semi-finals. As a result, he took a stay-busy fight against journeyman Stjepan Bozic in February, scoring an awkward 2-round TKO victory after Bozic was unable to continue due to a hand injury.

While we watched the fall of “King” Arthur, we saw the rise of Andre Ward in the tournament. In the tournament’s opening round, Ward scored an easy 11-round technical decision over (then) tournament favorite and WBA super middleweight champion, Mikkel Kessler. Using his superior hand speed, movement, and an effective clinch-and-maul tactic when needed, Ward kept Kessler out of his rhythm the entire fight. An accidental clash of heads opened up a deep cut over Kessler’s eye, forcing the stoppage of the fight in the 11th.

Ward followed up his eye-opening performance with a thoroughly dominant 12-round unanimous decision victory over Allan Green in June of 2010. Ward won by scores of 120-108 on all judges’ scorecards. Green was a late entry into the tournament, stepping in for Jermain Taylor, following the announcement of his retirement and withdrawal from the tournament.

“I’m just going to continue to naturally evolve and I hope everyone enjoys my fights.  But, ultimately, it’s about winning in this sport,” Ward would go on to say.

As we head into Saturday’s tournament semi-final, Andre Ward is now the favorite to win it all, while Abraham has been reduced to the heavy underdog. Many, if asked to pick the winner between Andre Ward and Arthur Abraham, would have quickly picked Abraham, based on both fighters’ respective careers. The unpredictable results of 3 fights for Ward, and 4 for Abraham, have reversed the roles of each fighter.

Ward and Abraham have traded places in the tournament. Seen as an early favorite, Abraham is now a decided underdog. Seen as a long shot early on, Ward is the pick of most to win it all.