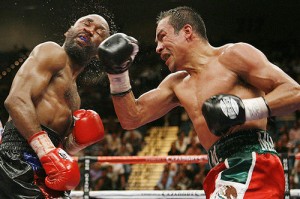 According to sources close to Top Rank, undisputed lightweight champ, Juan Manuel Marquez has signed off on his end of the contract to face Manny Pacquiao in the third part of their close, disputed trilogy on November 12th.

The deal offered to Marquez is rumored to be a flat $5 million purse, plus a percentage of pay-per-view revenue for any sales over 850,000. The bout would also be contested at a 144 lb. catchweight.

In their two previous encounters, both fighters battled to a heated draw at featherweight in 2004 while Pacquiao came out ahead in a disputed 2008 decision while competing in the super featherweight division.

Pacquiao has yet to sign his end of the contract, but is expected to do so within the next few days.

Marquez’s previous promoter, Golden Boy, had the right to match any offers made to their former client, but opted not to match the deal, with could conceivably bring Marquez more than three times his usual asking price.