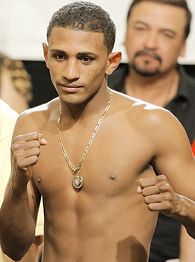 Julio was scheduled to take on Antwone Smith in the main event. Due to an elbow injury sustained by Smith, Anges Adjaho (25-5, 14 KO), who is 1-4 dating back to 2009, has been chosen as the opponent to welcome Julio back to the welterweight division. Joel Julio (36-4, 31 KO) last fought in August of 2010, winning a 10-round unanimous decision over junior middleweight journeyman Jamaal Davis, following last April’s TKO loss to Alfredo Angulo.

Opening up the broadcast will be welterweight prospect Sadam Ali (12-0, 7 KO), taking on junior welterweight journeyman John Revish, in a scheduled 8-round bout.