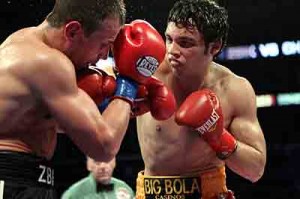 Zbik took many of the early rounds with quick shots to Chavez’s head, but the second generation star started to wear the defending champion down with a thudding and dedicated body attack. By the end of the bout, Zbik was completely spent and Chavez swept the final rounds to take the decision and the title by scores of 114-114, 116-112, 115-113. The Boxing Tribune also scored the bout 115-113 in favor of Chavez.

Froch used distance and angles, keeping a deliberate, but steady Johnson at a safe distance for most of the fight. Johnson was never seriously hurt by anything landed, but he could never quite get sustained access to Froch’s chin or body.

Although hit more than necessary, Kessler quickly proved himself to be the better-skilled, more seasoned fighter by gradually breaking down Bouadla with head and body shots before disposing of him at the end of the sixth round.

Bouadla was down in the third, fourth, and twice in the sixth before the referee called an end to the contest. He was also deducted a point in the third round for spitting out his mouthpiece.

Rubio is #1 challenger to new WBC middleweight champion, Julio Cesar Chavez Jr. and called out the new champion in his post fight interview.