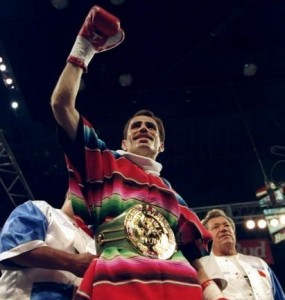 After a long and valiant struggle, 2-time world champ, Genaro Hernandez lost his battle to cancer today, passing away in his Mission Viejo, California home. He was 45.

Some people treat the designation “working class” as if it were an affliction of sorts. Genaro Hernandez, the lanky kid from South Central Los Angeles, lived the working class lifestyle and reveled in the honest, hard work that took him from the barrio to two separate reigns as 130 lb. world champion.

“Chicanito” had two separate runs as super featherweight champ, winning the vacant WBA title against Daniel Londas in 1991 and holding the belt until late 1994, when he decided to move up to lightweight to challenge Oscar De la Hoya.

Hernandez was stopped in six by De la Hoya, but the loss only served to motivate the 5′ 11″ technician. Three fights later, he would beat the legendary Azumah Nelson to take the WBC super featherweight title, making three more defenses until dropping the belt to Floyd Mayweather jr. in 1998.

The 2-time champ would retire with a career mark of 38-2-1, 17 KOs and would make eleven successful title defenses over two title reigns, scoring victories over the likes of Azumah Nelson, “Famoso” Hernandez, Jorge Paez, and Harold Warren.

Post- retirement, Hernandez worked with Compubox, did some Spanish-language commentary, and worked as a boxing instructor until diagnosed with a rare form cancer, affecting the head and neck.

After a long battle with the illness– a battle which saw a remission and then a heart-breaking re-emergence– the decision was finally made to give up chemotherapy. Five days later, the champion would pass away.

The Boxing Tribune sends its condolences to Genaro Hernandez’s family and friends as we mourn the loss of an outstanding fighter and an even better human being.