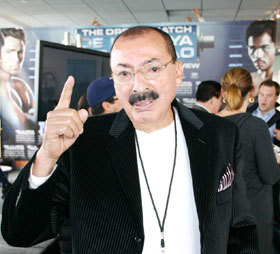 “Boxing saved me and has given me the chance to save others who may be walking in the wrong direction. It’s a sport that has helped many children on their way to the darkness and put them on track and allowed me to make them better men. All my life I have sought out young people from a life of drugs, crime and gangs. This is very beautiful.” — Ignacio “Nacho” Beristain

“Nacho” Beristain has established himself as one of the all-time great trainers in the history of the sport and is widely regarded as the top teacher of the classic “Mexican” style of boxing. Rooted in solid fundamentals with a keen eye on balance, Beristain’s style is focused on creating opportunities for offense.

Born in a small town in Veracruz, Beristain has been around the sport of boxing since age 7. Despite some amateur and pro bouts, vision problems cut short his hands-on fighting experience, but he soon shifted over to training and found that he excelled as a teacher.

Beristain is to be officially inducted into the International Boxing Hall of Fame this weekend in Canastota, NY.