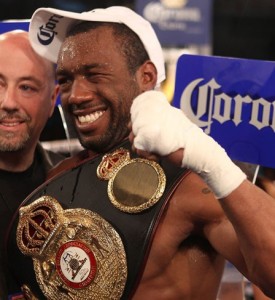 The 25-year-old southpaw from Las Cruces, New Mexico, Trout, won the vacant title in February via one-sided unanimous decision over lackluster Rigoberto Alvarez in Alvarez’s hometown of Guadalajara, Jalisco, Mexico. Prior to the Alvarez win, Trout had a slim resume, mostly fighting on the New Mexico and Texas club circuit. The other noteworthy fight on his resume is a 2009 majority decision win over Nilson Tapia in Panama.

Lopez is coming off a majority decision win against Michel Rosales in March. The 33-year-old native of Nogales, Mexico hasn’t tasted defeat since 2005, noting a 16-0 record and scoring wins over Rosales, Saul Roman, Ossie Duran, and Billy Lyell in that stretch of time.