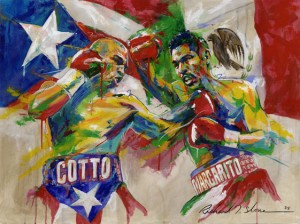 The long-rumored rematch of 2008’s Fight of the Year candidate is a step closer to becoming reality as reigning WBA jr. middleweight champ, Miguel Cotto, acknowledged that a handshake deal had been reached for a rematch with Margarito to take place on December 3 at either Madison Square Garden or a Las Vegas venue.

At a Puerto Rico press conference to announce the signing of super featherweight prospect, Luis Cruz, promoter Bob Arum, who represents both Margarito and Cotto, also confirmed the informal deal, saying that the bout would likely mean between $5-7 million dollars for Cotto, plus a percentage of PPV buys.

In their first contest, in July of 2008, Margarito took Cotto’s WBA welterweight title via bloody, brutal eleventh round stoppage.

Since then, both fighters have been through a career’s worth of high-profile beating and controversies– Margarito has been brutally beaten twice (Shane Mosley, TKO 9 and Manny Pacquiao, UD 12) and suffered a license revocation for attempting to use illegally-loaded hand wraps. Meanwhile, Cotto also suffered a brutal beating at the hands of Pacquiao, as well as a level of inactivity due to injury and contractual issues.

UPDATE: Bob Arum announced late Wednesday evening, 6/29, that the Margarito-Cotto had been officially signed for 12/3 and that the only detail yet to be ironed out is the venue.