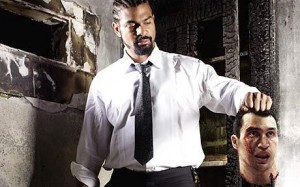 It has been two years since Haye’s first face-to-face meeting with IBF/WBO heavyweight champion Wladimir Klitschko, and the two title holders will finally meet in the ring after a long verbal tango and promotional tour. We are in the final week leading up to the biggest heavyweight fight in nearly a decade, and for both men with a history of pulling out of fights due to injuries, there is nowhere to go but into the ring.

After Haye knocked out heavyweight gatekeeper Monte Barrett in his 2008 heavyweight debut, he was scheduled to meet Wladimir Klitschko in the ring on June 20, 2009, but pulled out of the fight only 17 days before, citing a back injury. It was reported that more than 60,000 tickets were sold and had to be refunded. Later that year Haye backed out of negotiations for a proposed September fight with older brother Vitali Klitschko, opting instead to challenge Russian giant Nikolai Valuev, the WBA heavyweight title holder at the time. Haye went to Germany and took a majority decision and the WBA belt from Valuev.

2010 gave us more verbal back-and-forth between Klitschko and Haye. Klitschko knocked out Eddie Chambers and Sam Peter, while Haye battered John Ruiz and a hesitant Audley Harrison. Both men called the other out publicly, with each call-out producing nothing more than fan chatter and plenty of YouTube content.

After Klitschko pulled out of his December fight with Dereck Chisora, citing an abdominal injury, he turned to negotiating a potential March 2011 showdown with Haye. It was all for naught, however, as the heavyweight fight of the decade again failed to materialize after the venue and date could not be finalized. In a rather predictable twist of events Klitschko re-scheduled his title defense with Dereck Chisora, and Haye came back to the table, causing Klitschko to claim a lack of fitness and leave Chisora at the altar yet again.

David Haye (25-1, 23 KOs) is right where he has told the world he wants to be: standing face-to-face with Wladimir Klitschko (55-3, 49 KOs), the number 1 heavyweight in the world. His heavyweight resume (Monte Barrett, Nikolai Valuev, John Ruiz, and Audley Harrison) leaves much to be desired, but he is the best challenge available for either Klitschko, given their refusal to fight each other.

After more than 2 years of verbal fencing between Wladimir Klitschko and David Haye, the talk has finally produced the unification bout that Haye has wanted since he entered the heavyweight division. Haye has goaded the quiet and respectful Klitschko into his own brand of trash talking in the lead up to Saturday’s WBA/IBF/WBO heavyweight unification bout at the Imtech Arena in Hamburg, Germany. The mutual dislike between Klitschko and Haye is as clear as day.

David Haye came to the heavyweight division boasting the style and substance to electrify and invigorate the once-great glory division. He claims the Klitschkos have done a disservice to the sport of boxing, and he is the man to end their reign and bring excitement back to the division. During his heavyweight run he has shown flashes of an exciting style. Against Barrett, Ruiz, and Harrison, Haye capitalized on the many mistakes of his inferior competitors. Against Valuev he employed the same safety-first style that he openly detests, and was nearly knocked out of the ring by the surprisingly power-deficient 7-foot giant, en route to a majority decision win.

We know what to expect from the measured and calculated Wladimir Klitschko. Regardless of what is in front of him, his patient, punishing style has paved the way to 13 straight wins, dating back to his 2004 TKO loss to Lamon Brewster.

Both fighters have promised fireworks. The stylistic matchup suggests the possibility of a long night, given the patient, safety-first style of Wladimir Klitschko, and Haye’s proclivity to wait for his opponents’ mistakes to unload. Haye has said he will knock out the robotic and measured Klitschko. His quick wit and vast arsenal of insults appears as insecurity to some, and, to others, as gamesmanship and a psychological ploy to frustrate the always-calm Wladimir Klitschko. Wladimir Klitschko has said he will punish the loquacious Londoner and knock him out in the later rounds.

Talk is cheap. Come Saturday night, actions will determine the winner and true ruler of the heavyweight division.