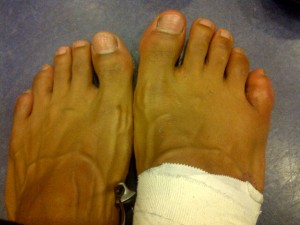 David Haye would have you believe that the biggest heavyweight fight since Lewis-Tyson was compromised by an injury to his little piggie that went “wee, wee, wee” all the way home. It would be the second high-profile fight ruined by a podiatric mishap this year (See: Shane Mosley’s festering foot blisters).

When Haye took off his boot and sock to share with the world the “real” reason behind a monumentally pathetic performance, it was the perfect end to a three year boxing cock tease that had Haye painting himself as some sort of New Jack Muhammad Ali.

From the first moment he “called out” the Klitschkos in 2008 right up to his ring entrance in the rain-soaked Imtech Arena in Hamburg on Saturday, Haye was pure marketing whirlwind. It was like a title push designed by a Madison Avenue advertising executive. The boisterous Brit “branded” his name, worked his market, and always stayed “on target.”

And he parlayed his marketing efforts into an 8-figure pay day and several big money prelims. Each bout not Klitschko was promoted as a lead-in to the fight, which was perpetually just around the corner and always bogged down by injuries, money issues, and a myriad of problems “standing in the way” of Haye’s mission to usher in a new era of heavyweights.

Wishful (gullible) fans bought into the marketing scheme and helped fuel the ever-growing publicity push for a fight that was supposed to mean something or, at the very least, be an actual fight.

However, when push came to shove, the ring, as is always the case, became the great truth teller. Frauds and over-hyped pretenders are usually weeded out and Saturday’s show was no different. Haye’s marketing campaign ended when the bell rang and he was revealed as someone who, ultimately, lacked the skills to earn a victory and the confidence to truly test himself. The end result was a complete and total waste of time and another excuse for HBO to write off the heavyweight division– And after Klitschko-Haye, supposedly the biggest fight the division had to offer, who could blame them?

Sadly, a Haye win would’ve been good for boxing’s bottom line. Fight fans love sound bite machines and Haye fit the bill of someone who could keep Twitter jockeys and boxing websites giddy with material for years.

The question is whether Haye ever, at any point, even bought his own hype. What can you say about a fighter who had no plan B and whose plan A could only have been accentuated by roller blades and an 80-foot ring? Haye fought Klitschko like Audley Harrison fought Haye, except nobody expected anything better from Harrison.

Battered pinky toe or not, Haye had the physical ability to shock the world and usher in a new era, he just lacked the guts necessary for the glory he demanded.
*******************
I just wanted to acknowledge all the emails and messages of support I’ve received over the last couple of weeks. I’ve communicated with a lot of smart, hardcore fans and a couple of respected, high-profile boxing scribes. Thanks for the encouragement.

About a year ago when I started this site, the goal was never to make friends or network myself into bigger, better gigs. Frankly, I would’ve been happier just sitting on the sidelines, enjoying the fights and forgetting about all the nastiness that takes place behind the scenes and behind the computer screens. My ultimate goal, though, was to start an independent boxing site that wasn’t funded by promoter or network money. Then, when things are stable and we are a real and prominent presence, hand it off to be run by someone younger and more internet savvy.

What people forget is that boxing is REAL people literally putting their lives and livelihoods on the line. Fighters and fans are the ones who suffer when information is filtered through scum bags with more ambition than integrity. It’s easy to play the “me” game while clacking away on Twitter or waxing poetic in a painfully first person article about whichever fighter currently being pushed by a promoter with ad space on your site.

Many of the “big” names in the boxing media don’t respect you. They think you’re dumb and don’t even bother to hide their disdain. They’re arrogant and confident that nobody will ever ruin their cozy little set-up because, after all, they are the ones entrusted with informing the public.

I take it as a badge of honor to be hated and attacked by egotistical boxing writers who have been on more promoter payrolls than the Tecate Girls and who lease out their editors for work on promoters’ websites.

The one thing everyone needs to know about me is that you will always know where you stand. If I dislike your work or you, personally, I will tell you so. I’ll never pretend to be one way, while secretly planning a behind-your-back attack. I’ll be the first to admit that I’m not always right, but you can guarantee that if I make a mistake, it’ll be an honest one and it’ll have nothing to do with who happens to purchase ad space on my site. The proof of my integrity is on the front page of my site and in the decisions I make as editor. If you find something shady or unethical coming from a writer at this site, I welcome the critical focus.

It’s easy to play loose and easy with moral boundaries when blogging from the comfort of your mother’s kitchen table in Brooklyn, bag of Cheetos resting next to a list of escort services. It’s all a game.

I understand the drive to shake the right hands and kiss the right asses, but there’s really no money in being a stooge or a gimp.

I knew that if The Boxing Tribune ever started to really grow, we would be targeted for attack by these same douche bags and wanna be quasi-star fuckers. It was inevitable and, really, it’s nice to see because it shows me that we are, indeed, on the right track. Plus, we welcome the visits from turned-off fans who actually expected something better from these characters.

So, keep trying to beat us down in the months and years to come. We’re getting bigger and better. Our numbers our growing and more and more fans are coming forward to let us know that our mission and our efforts to create a truly independent media voice are appreciated.

The Boxing Tribune is most definitely a work in progress and you will be noticing some big changes in the site over the next few months– notably a change in the site design as well as the addition of some recognizable names to our roster of contributors.

Again, thanks for the support. We hear you and we’re working to serve you even better.

You can email Paul at paulmagno@theboxingtribune.com, follow him on Twitter at www.twitter.com/boxing BTBC or check him out as he gets “outed” by lonely men on social media sites for being ugly. Paul is a full member of the Burger King Kid’s Club.