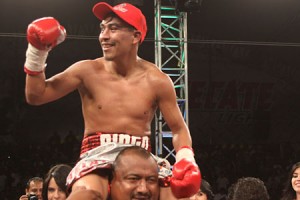 Miranda has already made three successful defenses of his title since winning the vacant strap via TKO 5 against Richie Mepranum in June of 2010. The native of Veracruz, Mexico has been a ranked flyweight since 2008 despite a rough 2009, which saw him drop one-sided decisions to Pongsaklek Wonjongkam and Moruti Mthalane. A win over Viloria would represent the biggest win of his eleven-year career.