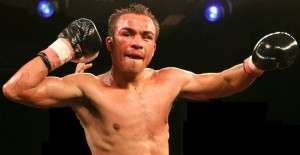 Ramos his the canvas and stayed there for several moments before getting back to his feet.

Marquez now moves on to his third contest with the Filipino phenom, Pacquiao.

On the undercard, Rafael Marquez (40-6, 36 KOs) dominated the overmatched Eduardo Becerril (12-8-2, 4 KOs), dropping him in the fourth round and eventually forcing Becerril’s corner to stop the contest between the fifth and sixth.

Roman “El Chocolatito” Gonzalez (29-0, 24 KOs) battered and bloodied Omar Salado (22-4-2, 13 KOs) en route to a TKO 7 victory for the the reigning WBA jr. flyweight champion. Salado was down three times in the contest.