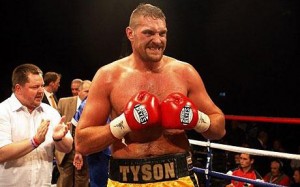 Wembley Arena, Wembley, London, United Kingdom– Tyson Fury (15-0, 10 KOs) not only beat rival, Dereck Chisora (14-1, 9 KOs) to add two regional/national belts to his young resume, but he very well may have earned the right to a big money bout with one of the Klitschko Brothers in the immediate future.

In the first two rounds of the all-UK heavyweight showdown, Fury seemed uncomfortable and unsure against a hard-charging Chisora. By the third round, though, Fury was starting to time the Zimbabwe-born Brit and look for chances to counter. By the end of the fifth, Chisora was visibly tired and no longer pursuing as doggedly as before. The rest was all downhill for the defending Commonwealth and BBB of C heavyweight champion.

The rest of the fight had pretty much the same script with Fury landing some solid shots to the head and body against a Chisora who was willing, but increasingly worn out. With the exception of a furious, but mostly ineffective flurry of punches in the last minute of the tenth, Chisora offered up no sustained offensive push after the fifth round.