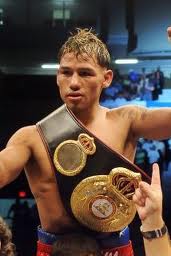 On Thursday night in Panama City, Luis Concepcion will return to the scene of his epic April battle with Hernan Marquez as he takes on former contender/interim belt holder Manuel Vargas.

Concepcion (22-2-0, 17 KOs) will be looking to rebound from his loss to Marquez, the second of his career. The bout was a surefire fight of the year candidate and indeed, one of the greatest action fights in recent memory. Concepcion was ultimately knocked out in the 11th round, ending a 19 match winning streak.

Vargas (30-8-1, 15 KOs) is looking to turn his career around after losing five of his last nine fights. He has, to his credit, taken some on some very high level opponents during this run including Nonito Donaire, Giovani Segura and Roman Gonzalez.

The bout will take place at Panama City’s Arena Roberto Duran and is scheduled for 10 rounds.