Like Oscar Wilde’s famous character Benjamin Button, who was portrayed by Brad Pitt in the 2008 movie adaptation, “The Curious Case of Benjamin Button”, undefeated heavyweight Alexander Povetkin’s life appears to be moving in the wrong direction.

No, Povetkin (21-0, 15 KOs) isn’t actually turning into a baby, rather it’s his career that seems to be moving in reverse.
It has seemed that way for a while now.

Povetkin’s upcoming clash against former heavyweight titlist Ruslan Chagaev, whose only loss was to 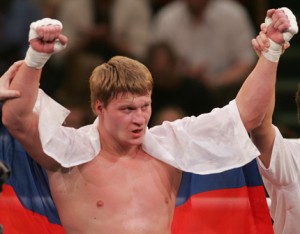 Wladimir Klitschko in 2009, is a sharp disruption to that modus operandi and gives heavyweight fight fans yet another bout to get excited about.

In short, the boxing world is ready to see what the undefeated Povetkin can really do against top competition. He stands 6’2” and weighs 225lbs which is a fairly good size for a heavyweight historically speaking. He packs a mean punch and has real skill because of his extensive amateur background. He’s far from the crude-punching-limited-skilled-wonders we’ve been inundated with recently, and he could pose a real challenge to either Klitschko brother should he meet one in the ring.

It was supposed to happen a couple of years ago.

Inexplicably, Povetkin declined the opportunity to fight for the world title as well as the potential to earn his largest payday to date. His trainer, Teddy Atlas, just did not quite believe Povetkin was up to the task yet.

Surely he would keep fighting contenders, though, to get the additional trainer prescribed heavyweight seasoning, right?

Wrong. Alexander Povetkin’s career went into Benjamin Button mode (ironically this occurred about the same time the movie came out). Since then, Povetkin has only reeled off nondescript wins over less than notable opponents. A glance at his resume since handing Eddie Chambers his first loss in 2008 is akin to taking a random glance through a phone directory.

Who are these people?

Leo Nolan, Javier Mora, Teke Oruh, Nicolai Firtha – sure the truly hardcore fight fans out there might know who they are, but do they really care if Povetkin beats them? Hasn’t he already gone past the time in his career when he fights gatekeeper-type palookas and starts taking on real contenders? What happened?!

Kalle Sauerland, Povetkin’s promoter, told ESPN’s Dan Raphael that the death of Povetkin’s father last year was a big part of why his now 31 year old fighter has not yet challenged for the championship.

“Alexander needed some time to get over the sad news. But now he is ready for a world title fight. He has always been one of the most talented heavyweight contenders out there.”
Povetkin agrees, and while he won’t really be fighting for the heavyweight championship against Chagaev either, the WBA belt he could pick up would certainly go a long way in helping procure a bout for the real title against Wladimir Klitsckho sometime early next year.

“I have won the Olympic gold medal and I´ve been World and European Amateur Champion,” the unbeaten Povetkin said. “Now I want to finally accomplish my goal of winning the world title as a professional. I have a lot of respect for Chagaev, but he will not get in my way.”

Let’s hope the Benjamin Button stuff doesn’t get in the way again either.

Kelsey McCarson knows that Benjamin Button disease isn’t real but it doesn’t keep him from referring to it all the time anyways. Follow him on twitter @TheRealKelseyMc.