(First in a series of articles to help make you a more informed, knowledgeable fight fan…or to give you something to show your wife or girlfriend so she can be one too. Making the world a better place, one fist to the face at a time.)

For today’s lesson, allow me to begin by quoting Demetrius Andrade on FNF last week: “My fight plan is to jab, jab, jabjab, 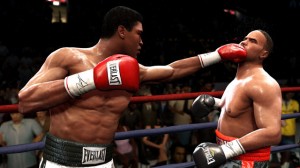 jabjabjabjabjab…” Let’s face it. The Providence native just used more jabs in that sentence than most fighters not named Klitschko use in an actual fight. But used properly, and if you’re not afraid to put casual fans to sleep, a well-thrown jab can win a fight practically by itself. Combined with other punches, it’s the appetizer to the main course of a spectacular one-punch KO. Done wrong, however, it’s an invitation to your opponent to counter you and knock you out.

There are two things that need to be kept in mind when throwing the jab. One is to snap it out, don’t push it out. Meaning when you commit to throwing it, it is a punch—treat it as such. A lot of fighters paw out the jab, using it as a rangefinder, throwing a lazy little love tap or push that doesn’t force the opponent to respect it. When you’re throwing that jab, yes it’s an arm punch pretty much by definition, but make it land like a cold splash of water on the face of your opponent. A good trainer will spot this in sparring as well as in bag work and fix it.

The other thing to remember when throwing the jab is to put some torque on it. Go ahead and stand in front of a mirror for this next demonstration. When your hands are up in the blocking position, either in the orthodox or southpaw stance, the back of your lead hand faces your opponent. But when the punch lands, the forearm is rotated over so the knuckles are right in the opponent’s mug where they belong. There’s a 180 degree rotation of the hand there.

Why does that rotation matter? Simple. With an abrasive surface on the hands (like, say, the leather of a boxing glove), if that torque can be delivered quickly and at the point of impact, it has a slight “pull” effect on the skin of the opponent’s face. Combine that with the underlying bone structure and what you’ve got is the same effect that molars have on meat—it tears the skin as if it has been chewed. It’s not as efficient as teeth, of course, not unless you’re fighting bare-knuckle, but it’s still the stuff that cuts are made of. Watch the replay of the John Molina-Rob Frankel fight on FNF, specifically the four (!) separate cuts that Molina’s fists opened on Frankel’s face (all four of them caused by punches and not clashes of heads) for the effect that good torque can have. Molina has a reputation for cutting his opponents (one reason he’s so TV-friendly) and there’s a lesson in there on effective use of the lead hand.

One of the biggest misconceptions about the jab is that it’s a tall fighter’s punch. Part of this is because it’s so often used as a sort of arresting motion for an opponent—guys like the Klitschko brothers use it as a roadblock where shorter fighters can’t get inside it. But shorter fighters can make good use of the jab as well. The key is to weave away from the taller opponent’s lead hand (also known as “slipping the jab”) and throw a jab of your own on the way in—this interrupts the punching motion of the taller fighter so he can’t catch you with a counter from the trailing hand (a cross or a straight punch.) As with most things in boxing, it’s all about looking for an opening. Weave when the opponent’s feet are still set and he’ll be able to time you coming in and use your momentum against you (the stuff that KOs are made of) or at the very least interrupt your advance. Time it right though, and you’re on the inside, you’ve taken away your opponent’s height, and now it’s time to “break some windows” (as Teddy Atlas puts it) and pound away at the body of the longer, taller opponent. The old-timers say that “take out the body and the head’s gonna fall”, and they’re absolutely right. It takes the jab to make that happen.

Finally, the jab allows for a sort of distraction effect. Keep throwing the jab and the opponent’s going to be focused on that side of the body and that side of the action. This means he’s not looking at what your other hand is doing…and when your other hand is throwing a straight right (or left, if you’re a southpaw) or a cross that catches him with a punch he never saw coming right on the temple or the chin? Good night, sleep tight, the ref won’t even need to take up the count. If the opponent wants to see the punch that knocked him out, he can go watch it on YouTube after he wakes up.

A jab can’t knock an opponent out by itself unless he’s got a terrible chin. But it’s very, very difficult to knock someone out without one. We hope this look at boxing’s most basic punch has opened your eyes and that now you can go forth as a fighter, a teacher of the game to your wife or girlfriend (or husband/boyfriend for the ladies reading!), or just as a more informed fan. In the coming weeks, our lecture series will continue on the fundamentals of the Sweet Science. Class dismissed.

Fox Doucette covers Friday Night Fights for The Boxing Tribune. His weekly column, The Southpaw, appears on Thursdays. He learned the sport from Teddy Atlas, so expect a bias toward Atlas’ beliefs about the sport to creep into the lectures once in awhile. Fan mail, hate mail, and teaching offers from colleges can be sent to beatcap@gmail.com.