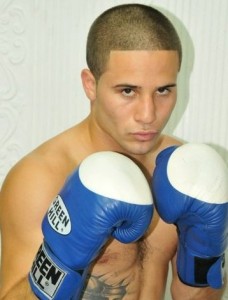 attention. Brooks has the fan friendly combo of fighting hard in the ring and bravado outside the ring. On first glance, he may not be the quiet fighter some fans like but he brings a sense of reality with his confidence.

“It comes from experiences. I’ve had so many trials and tribulations and breaking points. I’ve had points where I said if I lose this next fight I’m just going to give it up. I’ve overcome those thoughts and I’ve won those next fights and I’ve beat great fighters (referring to amateur experience). I’ve been in the trenches; I’ve been on cloud nine. If I didn’t think I could do this I would be just as happy working a nine to five. Bottom line is I might sound a certain way, but I’m not trying to be cocky, but that’s who I am, this is my game, this is what I was built to do.”

Brooks knows he has the gift of gab and hopes to use his ability to talk in the future when fighting is done.

“I was built for this (talking in interviews). If I was not boxing I would be doing something in the media. When I’m over the hill I want to be a commentator (for live boxing).”

Brooks came into boxing at age sixteen and currently trains in the Westbury Boxing Club in Long Island, NY with trainer Scott Lopeck. He acknowledges that he went through obstacles coming into boxing at sixteen where most fighters started far younger, but he says, “The hard road is the best road.”

Brooks currently holds several jobs including being a teacher at an alternative school. He showed a passion when he discussed working with kids in need of help, including handicapped children and those with behavioral challenges.

Inside the ring, Brooks and his handlers feel he has big potential despite a short amateur background. He feels he was made more for the pro game because he is willing to get inside and mix things up.

“Amateurs is a sport and the pros is a fight. Rounds are longer, it’s dangerous, you don’t get a standing eight count, you get hit in the temple, you don’t have a cushion, you’re in a fight. You have to be more rough to step in the ring to fight someone for eight to ten rounds, but that’s what makes it such a great sport. As a pro you’re putting it on the line and you have to cater to the fans by putting everything that you got out there.”

When asked about style, Brooks was open to adjusting to each fight. He wants to have the whole package that involves aggression to entertain the fans while having good defense that wins fights.

“I can’t even tell you what my style is, because every time I step in the ring something else comes out. I try to adapt, have good footwork, good boxer/puncher, but lately I’ve been standing in front banging out with guys. I have very good cagey defense, good head movement, and don’t take many good shots. My style is aggressively flawless. I try to be aggressive like a Gatti and defensively flawless like a Mayweather.”

His fifth pro-fight and first six rounder was the first test of who he can be as a fighter. Jamell Tyson (2-3-1) gave Brooks a handful and a lesson in persevering through a tough bout which he won by close unanimous decision. The bout was the main event in front of a capacity crowd in the Bronx and televised on Telefutura.

“Very good fighter, but to be completely, honest I made the fight a lot harder than it should have been. I could have been in a little better condition which is shame on me, but if I would have relaxed a little more and popped the jab a little more the fight would not have looked like that, not to take anything away from Jamell Tyson. I rate myself a 6.5 out of 10 on that fight. I did what I had to do to win the fight.”

I asked Brooks if tough fights like this will better prepare him for tougher opponents as his competition gets better with each fight. Brooks was well aware that to be a champion you have to be tested early and often.

“This is a sport and you have to fight and not be afraid to lose. God forbid I lose, you come back and fight harder. Look at back in the day, guys had 15-20 losses and were world champions. You have to go in there and fight and this sport has softened up a lot. I want to fight tough guys because they bring the best out in me.”

I asked Brooks that while he is an aggressive fighter why his KO ratio (one KO in five fights) is not what would be expected. Brooks delivered a straightforward answer taking responsibility for his actions.

“That’s on me, my second and third fight I was going through a lot of issues with my training camp and trainer and my head was not in the boxing game. I should have at least three or four knockouts. For some of these fights I have not been in the greatest shape. I’ve got the heart, I’ve got the mentality, but I have to stop playing around. For the fight with Tyson I trained really hard for that and if I did a few things different we could have had a different result. Look out for the stoppages for the future because I’m coming for it.”

This writer commented that along with proper physical and mental conditioning a fighter that employs a body attack much like a Miguel Cotto may see more stoppages in longer fights of eight to ten rounds as opposed to four round fights.

“A lot of people say that (being similar to Cotto). Cotto is one of the fighters that I look up to. People compare me to a lefty Cotto but I’m not on that level yet.”

At this time Brooks is going without a promoter and relies on advisor/publicist Matt Yanofsky. Brooks credits his trainer Lopeck and Yanofsky for being a major help in his boxing career.

The interview was finished with Brooks talking about his future and his goals in boxing.

“Make sure I stay humble. I have aspirations for going all the way with boxing. I want to hold a world title and unify it one day. God gave me the gift of having the drive and being healthy. People don’t realize what they got and I want to make the best out of it. I want to get in there and make the Pacquiao-Mayweather money. I want get in there, win the title, and be the 135-140 pound Marciano.”

“Bottom line, I stay humble and try my hardest. I’m just rolling with the punches, having fun with this, I’m in a good place right now and hard work pays off. You got to work hard in life to get what you want. Go hard or go home.”