What can be said about those wonderful times of the year when boxing writers are gathered together, ushered through musky gyms, and given access to big-time fighters in anticipation of an upcoming bout? 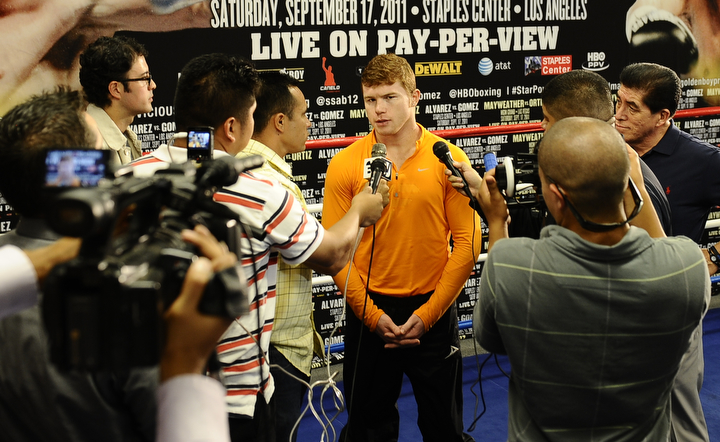 Media Day solely exists as a promotional tool, but for the media, it’s their chance to be out in public, to be somebody.

There’s not much money in boxing writing and, in most cases, NO money whatsoever. So, when the opportunity arises to hop on the short bus to Big Bear, shovel down some free, promoter-paid munchies, and act like a big shot for a couple of hours, well, they’re all over it.

I understand the urge. It’s natural. After all, writing can be a thankless endeavor where you’re expected to work your ass off, but get little more than a byline and, if you’re lucky, a few nice emails in return. It’s no wonder boxing scribes jump at the chance to be in any situation where they can be seen and play quasi-celebrity.

Ringside fight coverage, media days, and so-called press conferences–  All chances for the media to scowl over a notepad, play like a journalist, and then issue reports that could just as easily be done from the comfort of a laptop while sipping on a Dr. Pepper in their jammies.

At this point, these exercises in futility are part of the process when it comes to big-time prize fighting, but that doesn’t change the fact that they only exist as promotional tools. The media days, especially, are little more than set-ups and a chance to get some free advertising for whichever fight is being peddled.

Think about it. When was the last time something monumental ever came from a media day or staged press conference?

Most recently, the short bus was cranked up and shipped off to watch Saul Alvarez train at the Summit Gym in Big Bear, CA. What we got was the usual stuff.

“I feel great for this upcoming fight.” Alvarez told Fightnews. “I know there is a lot of speculation on who people want me to fight, but my focus is on Alfonso Gomez.”

Were they expecting to find a beer-bellied Canelo scratching at hemorrhoids and telling everyone, “I feel like shit…Really…and I’m not even focused on Alfonso Gomez?”

“Whoever they put in front of me, I’ll fight,” Alvarez told the LA Times. Then, El Canelo echoed the sentiment to Ring Magazine: “Let me be very honest, I believe that I’m ready for everyone…I’ll fight whoever my promoter puts in front of me.”

A real story would’ve been if Alvarez had told the assembled media, “Let me be honest with you, I’ll fight Chavez Jr. because I can beat him, but Alfredo Angulo scares the shit out of me and I’ve already told my promoter to not even think about making an Angulo fight.”

But, of course, no such thing happened and nothing of note really happens at any of these glorified infomercials. Nothing’s meant to happen. Rock the boat too much and you might lose the little you do have– access to the fighters, free grub, and the ability to be a big shot at public boxing events.

The promoters have learned to play the media like a fiddle. They call all the shots– Jump when told to jump, come when called, and even write what they’re told to write. Once you get a glimpse at the machine behind the curtains, it’s absolutely amazing just how much of the boxing coverage fans see is, literally, generated by promoters and publicists.

How many press releases get posted verbatim on boxing sites? How many Golden Boy-prompted headlines have we seen as a result of the Alvarez Media Day?

Nothing really interesting or cutting edge is ever asked, only the same talking points that the publicists have already written into the fabric of a press release saved on their laptop. They are headlines and articles that could’ve been written a month before the Media Day and without going through the whole sham.

To some writers’ credit, they actually manage to craft a story around the quotes-by-rote and staged sparring sessions. But, again, nothing new or groundbreaking and nothing that could not have been written from the other side of the world.

There’s nothing evil or sinister about a Media Day (unless the writer is one of those pay-for-play scribes whose editorial decisions are determined by who has ad space on their site)– It’s all just rather pointless.

The more attention-starved and pompous scribes will read this and scream sour grapes. The implication being, of course, that anyone who comes down on the media is simply jealous. These types of dick-heads will never really understand the point of not wanting to parade around and be the story. For the record, though, I’ve personally only asked for a press pass once and I’ve never been denied one for one of my writers. Access is simply not an issue with me and I have no pathological need to be famous. I also have no burning desire to be part of the boxing scribe community. Many do a fine job and, honestly, deserve to be lauded just as much as the douche bags deserve to be singled-out. However, my only loyalty is to the sport, it’s athletes, and the fans.

Really, it’s not our job to help Golden Boy, Top Rank, or anyone else promote their fights. These guys need the media more than the media needs them.

If anyone thinks that the free grub, VIP treatment, and the promise of continued access doesn’t shape media coverage, then they really aren’t paying attention.

And, yeah, media coverage does have a lot to do with what we end up seeing in the ring and the way companies conduct themselves when supposedly trying to gives us the best fights for our dollar.

A harder, more astute media, less willing to “play the game,” would be the first step in getting boxing out of the red light district of mainstream sports.

The idea of boxing reform, to any degree, is funny to some, but it needs to be noted that only the true louses are laughing. The rest of us actually care about the sport.