Andre Berto’s reign as WBC welterweight champion fell short of the expectations heaped upon his shoulders when he captured the vacant title in 2008. Since his title winning knockout victory over Miguel Angel Rodriguez, his career has come under intense scrutiny. Each opponent has been torn down, 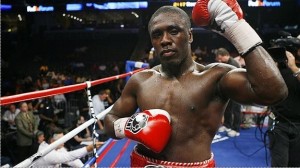 and each win has been discredited.

Brought up on ESPN’s Friday Night Fights and HBO’s televised undercard program, Berto’s frequent displays of hand speed, power, and killer instinct against a long line of club fighters gave birth to the lofty expectations that have plagued his career. When he defeated Cosme Rivera, David Estrada, and Michael Trabant to graduate from prospect to contender, more was expected out of one of HBO’s anointed stars.

Berto’s first defense came against former super featherweight titlist Steve Forbes, fighting at least two divisions above his best weight. A controversial decision victory over former WBA welterweight titlist Luis Collazo was followed up by a sloppy decision victory over then-light welterweight champion Juan Urango. Both wins did more damage to Berto’s career than good. He was ripped to shreds for not granting Collazo a rematch, and for excessive holding against a naturally smaller man in Juan Urango.

His April 2010 title defense against Carlos Quintana was initially met with less venom from the boxing media. A more dedicated backlash came following his eight-round knockout of the former welterweight champion. And when Berto made noise in calling for big fights with Shane Mosley and Miguel Cotto, only to settle for unheralded Freddy Hernandez last November, there was little to say in his defense.

To say that Berto was disliked would be an understatement. When he came up on the losing end in April’s fight of the year candidate with Victor Ortiz, the mainstream boxing media and fans let out a collective sigh of satisfaction. Max Boxing’s Steve Kim made a cameo in roving reporter Elie Seckbach’s video interview with Victor Ortiz’s manager, making clear his biased joy when he remarked, “Any time an Al Haymon fighter [Andre Berto] loses, it’s good for business.”

To be fair, Berto is deserving of some criticism. His resume looks about as thin as Lara Flynn Boyle in a bikini, and his proclivity to make bone-headed statements on Twitter while chasing down photo ops with P Diddy in night clubs makes one wonder how dedicated he is to the sport. He has also taken heavy fire for the amount he is paid against the level of opposition he has faced while under the good graces of HBO and advisor Al Haymon. But when the premiere boxing network offers up big paydays and is willing to look the other way at questionable opponents, is there anyone that can honestly say they would take a stand for integrity and rejects their offers?

Now defeated and humbled, will Andre Berto be given a shot at acceptance as a legitimate talent in boxing? In losing to Victor Ortiz, Andre Berto showed heart and a willingness to stand and trade with a big, young, fast, and strong fighter with a huge chip on his shoulder. He got up from a first round knockdown to score a knockdown in the second round. He battled through the determined onslaught of Ortiz for the next four rounds until he scored another knockdown and had Ortiz on shaky legs. When he got careless and walked into a counter left hook, he tasted the canvas yet again and had the wind taken out of his sails. For all his grit and determination, Berto ran out of gas and was outworked in the end, losing by scores of 114-111, 114-112, and 115-110.

After some time to regroup and recover, Berto is back and has taken the controversial Victor Conte (whose history with the BALCO scandal makes his clients targets for suspicion) as his strength and conditioning coach. After discovering he was anemic, Berto has revamped his training methods and insists, like all fighters will say before every fight, he is in the best shape of his life.

Andre Berto (27-1, 21 KOs) is back on HBO’s Boxing After Dark and faced with a chance at redemption and a second world title on Saturday night at the Beau Rivage Resort and Casino in Biloxi, Mississippi. Unlike Miguel Angel Rodriguez, Jan Zaveck (31-1, 18 KOs) is a worthy opponent and legit titleholder. His surprising 2009 knockout victory over Isaac Hlatshwayo in South Africa proved he can win in enemy territory. Zaveck has proven himself to be a formidable fighter. He fights from behind a tight shell guard reminiscent of Winky Wright or Arthur Abraham. One knock on the little-known Zaveck is that he isn’t as quick to transition to his offense as Wright and Abraham in their respective primes.

A second consecutive loss will further saddle Berto with the label of coddled product of HBO’s selective match-making. While a win puts him back in the title picture and possibly back in eventual contention for one of the welterweight cash cows – Manny Pacquiao and Floyd Mayweather. We will have to wait for Saturday’s reactions to find out whether or not he will be given any sincere credit.