George “Monk” Foreman III wants to be a contender.

At 13-0, 12 KOs in his young career as a heavyweight fighter, he’s well on is way to being one, too.  Foreman, whose father “Big” George Foreman needs no introduction to the boxing community, has been around the sweet science his entire life.  He has seen what it takes to get to the top of the mountain. 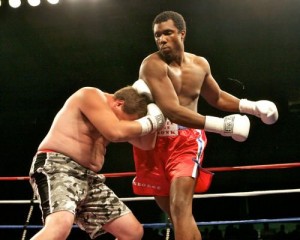 He knows the family business and business has been good.

“My biggest influence is definitely my father”, he says.  He then jokingly continues, “I want to grow up to eat just like him.  Ha!”.

Foreman seems as good-natured as his father (well at least the outside of the ring comeback version of his father), but don’t expect him to be a carbon copy of “Big” George inside the ring.  He’s got a style all his own which he’s perfecting under his father’s watchful eye.

“I sparred with my father not too long ago.  To date he has proved to be my toughest challenge.  Sparring with Dad taught me that boxing is a thinking man’s sport.”

Monk, though, knows it takes equal parts brain and brawn to be a contender.  So if you catch him training for a fight, you’ll see old school boxing workouts at their very best.  He digs holes.  He chops wood.  He drags Jeeps around.  You know, Rocky stuff.

“The only thing new school about my training methods is my iPod,” says Foreman.

True to form, Foreman admires and strives to emulate the greatest of the old school fighters.  He’s a student of the game.

You can see it in the ring.  Where a young “Big” George overwhelmed his opponents with furious, bullying aggression, Monk seems content to hone a more technical, skilled approach.  He works behind a solid, stiff jab and slides in and out of range behind skilled footwork.  And standing 6’5″ tall and 240lbs with 12 knockouts in 13 fights, he’s displayed the power one would expect from him, too.

Foreman’s team isn’t rushing him.   Don’t expect to see him in a “too much, too soon” scenario in the near future.  Akin to his inside the ring approach and appropriate to his Rice University education, Team Foreman is taking the deliberate, methodical approach to his development as a heavyweight contender.   Simply put, he’s being as smart outside the ring as he strives to be inside of it.  And it sure doesn’t hurt that his management team, headed by his father, is sure to have their fighter’s best interests at heart at all times.

“My current goal is only to get my name on the list of American hopefuls,” Foreman says.   “Just to have my named mentioned in such a conversation, this would be a dream come true.”

Foreman’s addition to the heavyweight scene as an actual contender would be a welcome one.  Alongside names like 2008 bronze medalist Deontay Wilder and former Michigan State football star Seth Mitchell, American heavyweight fight fans would have a solid stable of young heavyweight stars to follow which would bring much needed excitement to the sport.

When asked about the heavyweight division, Monk compliments the excellence of the Klitschko brothers whom he praises as having “mastered their craft”.

He also sees how important contenders are to the division.  He, like many, believes that American heavyweight contenders could add intrigue to the sport and infuse the weight class with more competition.  Unlike many, Monk has a chance to actually do something about it.

“The division has many great boxers, but no one knows who they are.  What the division lacks is an American hero i.e. Joe Louis, and a personality i.e. Mike Tyson.  Once we have an individual who excites the imagination of our citizens, the world will follow and the heavyweight championship will once again be the most coveted sports title in the world.”

“Then maybe one day,” Foreman adds with a touch of humor, “I will get a chance to fight whoever this guy is!”