In an unpopular heavyweight division starving for new talent, Cruiserweights David Haye and Tomasz Adamek moved up in hopes of bringing some excitement to a division ignored by American boxing fans. The Klitschko brothers – Vitali and Wladimir stand head and shoulders above the rest of the field and general interest in the division reached an all-time low. July’s Wladimir Klitschko-David Haye bout was the first heavyweight championship bout aired by HBO since late 2009. It was made clear that HBO was 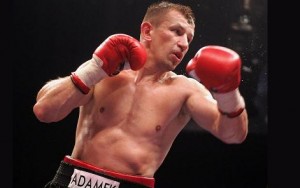 not interested in airing a Klitschko fight that did not include Haye or Adamek as an opponent.

HBO got their wish, but not what they hoped for when Haye and Wladimir Klitschko met in July. HBO will air its second Klitschko title fight on Saturday, this time featuring older brother Vitali taking on former light heavyweight and cruiserweight champion Tomasz Adamek.

Leading up to Saturday’s big fight, Adamek’s opponents – unheralded Vinny Maddalone and a washed up Kevin McBride, have not given fans much to hope for in terms of upsetting the established order in the heavyweight division. It is Adamek’s body of work as a heavyweight as a whole, rather, that one can look at and conjure up a scenario in which Adamek has a snowball’s chance in hell at victory.

Adamek’s first test at heavyweight came against fellow Pole and former heavyweight title challenger, Andrew Golota. Giving up 3 inches in height and over 40 pounds, Adamek used his feet and superior hand speed to rack up points en route to a fifth-round stoppage over the faded Golota.

The following year Adamek took on former Olympic heavyweight hopeful and fringe contender, Jason Estrada. No one will confuse Estrada for an elite heavyweight contender at this point, having lost his last two, including his fight with Adamek, but his speed and comparable size gave Adamek a different puzzle to solve. Adamek easily handled the sometimes wild flurries of Estrada over 12 rounds, winning a comfortable unanimous decision victory.

The stiffest test of Adamek’s heavyweight career came in April 2010 against former title challenger Chris Arreola. Adamek, hoping to rise up the heavyweight rankings and earn a shot at a heavyweight title, and Arreola, who hoped to return to form and earn a second shot at a title, battled over 12 hard-fought rounds. In the end, Adamek’s superior conditioning allowed him to land his shots and move before Arreola’s slower arm punches could land.

When Adamek fought Michael Grant last August, he showed he could withstand big heavyweight shots and bang with a bigger man. Grant is a shell of what he was once thought to be. At one point in his career he was called a possible successor to Lennox Lewis. Those sentiments were quickly dispelled by Lewis himself, in 2000. Grant was knocked out by Lewis in 2 rounds, and followed that performance up with another knockout loss to Jameel McCline in his next fight.

If you take a look at Adamek’s heavyweight resume, you won’t find a win over a complete opponent. Each opponent, whether by design or by chance, allowed Adamek to test his skill against a different type of fighter. Against Golota he kept his distance and picked Golota apart from a distance. Against Estrada he was able to focus on a more varied attack, matching speed against speed while banging away at Estrada’s body to slow him down and set up combinations upstairs. Arreola was the closest thing to a complete fighter to have been beaten by Adamek. His power and above average combination punching were offset in the end by poor conditioning, however. Michael Grant

Tomasz Adamek (44-1, 28 KOs) will get his big shot at heavyweight glory on Saturday September 10, when WBC heavyweight champion Vitali Klitschko (42-2, 39 KOs) comes to Stadion Miejski in Wroclaw, Poland, Adamek’s birth nation. More than 40,000 fans are expected to be in attendance to watch their hero challenge one of the two iron-fisted heavyweight rulers.

Vitali Klitschko, now 40, who arguably hasn’t lost a round since his 2003 slugfest with then-heavyweight kingpin Lennox Lewis, comes to Poland riding a 7-fight winning streak. Known as the more rugged of the Klitschko brothers, the unorthodox and awkward Klitschko has scored knockouts in all but three of his victories. Standing 6 feet and 8 inches tall and possessing a jab as powerful as some men’s straight rights, Klitschko presents a nigh-insurmountable challenge.

Will Adamek be able to stay away from Klitschko’s powerful right hand and get inside of his jab often enough to outpoint the Ukrainian giant? Conventional wisdom points to the negative, but Adamek remains undaunted and has offered his assurances that the WBC title will not leave Poland.

While most see Adamek’s chances at victory about the same as walking away from a hunting trip with Dick Cheney without buckshot in your face and chest, the outlook doesn’t have to be that bleak. Adamek will have to take lessons learned from his early fights as a heavyweight and put the pieces together to form the perfect game plan. Only then might we again see a true heavyweight champion not named Klitschko.