Victor Ortiz wants to be the best.

As the old saying goes, in order to be the best, one has to beat the best.  That’s exactly what Victor Oritz hopes to do against Floyd Mayweather, Jr. this Saturday night in Las Vegas, Nevada.  Here’s how he can do it.

Mayweather is an exceptional defender.  He blocks and parries punches better than any of his peers, but no one is unhittable.  Ortiz will need to throw punches early and often 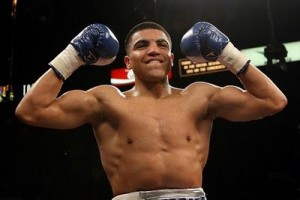 against Mayweather in order to be successful, and the more he lets his hands go, the more chances he’ll have to get them through.

Not only that, he’ll need to throw them anywhere and everywhere he can to land them.  He can’t focus on trying to only hit Mayweather upstairs. That would be his undoing.  Heck, he can’t even really focus on just going to the body either (thought it’s important to do so).   It’s just the kind of thing Mayweather wants.  He’ll need to literally hit him everywhere he possibly can.  If its a legal punch, Victor should throw it.

Case in point, when asked in an interview how he’d go about fighting Mayweather a second time around, the late, great Diego Corrales said he’d try to “just touch him” next time.  He’d hit his arms, his hands – anywhere he could land solid shots, he’d do it.  He’d land punches early and often no matter what, and that’s exactly the type of thing Ortiz needs to do.

Getting on top of Mayweather with lots and lots of punches will do two very important things for Victor: it would get him out ahead on points against the sometimes-slow-starting Mayweather, and it would set him up later in the fight when the high volume of punches could start to pay some real dividends.

Because he’s such an adept defender and counter-puncher, Mayweather eats long, looping, single-punchers alive.  Victor has shown in recent fights the ability to throw short, powerful combinations versus his opponents, but he’ll have to be even better at it against Mayweather.  In his last fight, Ortiz did an excellent job of this early against Andre Berto.  Ortiz’s punches landed first and they landed with more power.  This helped Victor establish early dominance in the contest.

However, as the fight wore on and fatigue set in, Ortiz’s punches became less and less compact.  The shot he took from Berto that floored  him in round 6 was because his combinations became more looping than short, more open than compact.  That cannot happen against Mayweather. Where Berto may be bullet-fisted, Mayweather’s punches are more like lasers: they are fast, straight and  unforgivingly precise.  Ortiz can’t leave himself open for anything like he did against Berto and hope to come out on top.

Not Just a Nickname

Yep, “Vicious” Victor Ortiz will have to be just that: vicious.  He’ll need to be equal parts fierce and ferocious.  Like he did against Berto, Ortiz will have to come to the ring focused, determined and just plain mean.  More than that, though, he’ll have to drag Mayweather somewhere he’s never been before: down for the count.  Ortiz is generally a nice guy outside of the ring, but in the ring on Saturday, he’ll need to have a scowl on his face. He’ll need to be a beast.  Like Teddy Atlas often says in ringside analysis on ESPN, he’ll need to “be the boss”.

Victor Ortiz will need to be more vicious than he’s ever been.

His aggression will need to dictate the fight.  Mayweather should always be stepping backwards and never comfortable.  Ortiz will need to come in with his guard high ready to throw punches.  He’ll need to push Mayweather where he wants him and he’ll need to unload on  him whenever he gets the opportunity.

Kelsey McCarson is about as excited for the Mayweather vs. Ortiz fight as he could be considering the PPV price will be $10 more than normal. Follow him on twitter @TheRealKelseyMc as he ponders how much they’ll charge us to see Mayweather vs. Pacquiao.