British heavyweight contender Tyson Fury (15-0, 10 KOs) is back in action against Ohio’s Nicolai Firtha (20-8-1, 8 KOs) on Saturday September 17. This 12-round heavyweight bout will take place at King’s Hall in Belfast, Ireland.

After taking the BBBofC and Commonwealth British heavyweight titles from Dereck Chisora in July, Fury 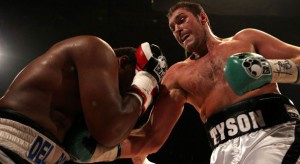 is making a quick turnaround, fighting on less than 8 weeks’ notice. With no world class opponents on his resume, Fury is looking to stay busy and gradually increase his level of opposition before stepping up to challenge a Klitschko.

Firtha is a journeyman heavyweight with losses to fellow journeymen Tye Fields and Manuel Quezada, and newly-crowned “Regular” WBA heavyweight champion Alexander Povetkin. In his last bout, Firtha scored a six-round unanimous decision over Ross Thompson, a fighter who began his career as a welterweight in 1992.

Former Jr. welterweight champion Junior “The Hitter” Witter (39-5-2, 22 KOs) is scheduled to fight on the undercard against an opponent to be named later.