As “the ESPN guy” around here, and as a longtime fan and viewer of Friday Night Fights, it’s always a pleasure to watch a guy who came up on ESPN’s show get his shot at the big time. Although I’m far from a hipster, there’s a real “I knew that band before they were famous” vibe to watching those sorts of big-time fights. So when Josesito Lopez 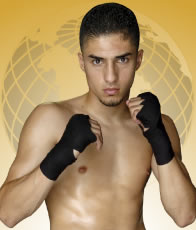 (29-3, 17 KOs) takes on Jessie Vargas (16-0, 9 KOs) Saturday night in the opening televised bout of the Star Power pay-per-view, I’m going to have a rooting interest as a fan of the sport. Nothing against Vargas, I’m sure he’s a fine kid, but Lopez made his name on FNF. I’m going to cheer if he wins and be a little bummed out if he loses.

Born Jose Manuel Lopez in Riverside, CA, Lopez didn’t exactly look like a world-beater early in his career. Lopez compiled his early record against complete nobodies and semi-somebodies who themselves had puffed up records. When he fought Gilberto Sanchez Leon (who regular FNF viewers may know as the stringbean—5’11” but only 130 pounds—who got knocked out by prospect Diego Magdaleno this past May), Leon was 16-1 but had eleven victories over guys with zero wins and had just fought a guy with a 1-17 record. Lopez went the distance with Leon, winning a wide unanimous decision but not showing the power one would expect from a legitimate prospect against a C-level opponent.

Given a chance to showcase his talents on a national stage, Lopez went on ShoBox in 2008 to fight Edgar Santana. Although Josesito dropped Santana twice in the eighth, by the end of the fight Santana had caught Lopez, put him on the back foot, and nearly knocked him out before the bell to end the fight rang and Santana walked away with a majority decision win. Josesito Lopez seemed to be at the end of the line as a potential contender, with a three-loss record (against 22 wins at the time), no signature wins to identify him as a real prospect, and having lost after finally stepping up to the B level in class. It looked like the dream was dead.

But a funny thing happened on the way to Palookaville. After a palliative second-round TKO over Alex Perez (who, including the Lopez fight, has lost 17 in a row including seven straight by KO and is 1-27-1 since 2001), Josesito stepped in against Patrick Lopez of Venezuela in a fight that was more about Patrick trying to make his name against a newly minted journeyman than about Josesito making any real impact on his own career.

Except nobody told Josesito he had turned into a tomato can. He dropped Patrick in the fifth round en route to an eight-round split decision (77-74 twice, 75-76) victory. After Josesito finished 2009 with two more wins in stay-busy fights against journeymen, ESPN came calling in August of 2010, making Lopez’s fight with Martin Cordova the co-feature of Chris Arreola’s fight with Manuel Quezada.

Teddy Atlas pointed out in that fight that Lopez’s trainer, Henry Ramirez, had pretty much told Josesito that the fight was win or go home, and it was. If Cordova had won that fight, I’d probably be writing this column about him today. As it stands, Lopez carried that fight fairly easily and won a unanimous decision (77-74, 78-73 twice, with Cordova getting docked a point for a particularly blatant low blow in the eighth), leaving FNF fans to think about Josesito and remember his name during the long autumn of football that followed the FNF season finale the following week.

FNF came calling again this past January, pitting Lopez against then-undefeated prospect Mike Dallas Jr. and again billing the fight as a do-or-die contest, the winner of which would continue to make his name in the sport. Lopez again answered the call, his dedication to the sport under Henry Ramirez in plain sight. Indeed, while the Cordova fight showed a guy who was beginning to show a glimmer of promise, the Dallas fight was akin to the kid you knew from middle school who went home on the last day of sixth grade looking like a little boy and came back for seventh grade five inches taller with newly minted muscles and starting to look like a man. A knockout in round seven told the world this ain’t no tomato can here; Josesito Lopez had arrived.

Of course, as with any puberty metaphor, there are growing pains; Lopez was to fight on FNF in Reno in May, but a deep knuckle bruise forced him to pull out of the fight (Chris Arreola took his place on short notice, the Ramirez connection again on display, and beat up a hapless Kendrick Releford that night).

Saturday night, Lopez fights an undefeated prospect, Floyd Mayweather’s favorite kid in his promotional stable, a guy who the media and the spin machine want you to believe is the next big thing. Vargas is undefeated but untested, and if Mayweather and Golden Boy and the promotional machine think Josesito Lopez is just another opponent, they are in for a bolshy surprise come fight night. This is not the Josesito Lopez who lost on ShoBox three years ago. This is a fighter who has learned the sport, refined his technique, and is ready to make a statement with the world watching. You’re a real boy now, Pinocchio. You got our attention on ESPN, and for those of us who love to watch a guy graduate from FNF up to the big time, now’s your chance to do us proud.

Fox Doucette covers Friday Night Fights for The Boxing Tribune. His weekly column, The Southpaw, appears on Thursdays. Fan mail, hate mail, and offers to drive the bandwagon to have Fox replace BK in the FNF studio can be sent to beatcap@gmail.com.