This Friday Joey Eye Boxing and David Feldman have their fifth card at the new Harrah’s Casino in Chester,PA, outside of Philly.  The card which will be held outside for the first time on the racetrack looks to blend boxing and MMA on one night.  The action will start with seven boxing fights followed by the MMA fights. 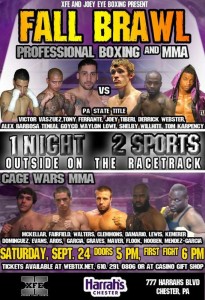 Headlining the card is local favorite light heavyweight Tony “Boom Boom” Ferrante 12-2 (7 KO) taking on Tommy Karpency 21-2-1 (14 KO) for the PA State Light Heavyweight Title in a ten round bout.  Ferrante who is from Philadelphia, will have the crowd support considering he draws well to the local cards, but Karpency has the experience edge.

In the co-feature Ahmad Samir 10-0 (3 KO) takes on Pedro Martinez 6-4 (3 KO) in a six round cruiserweight bout.  Samir was born in Egypt where he had a successful amateur career.  He then relocated to New York in 2007 to turn pro.  Samir is considered a talented prospect but is largely untested yet as a professional.

All action fighter Victor Vazquez was scheduled to be on the card as well but was removed due to not having an opponent.

One interesting note on the card is that at this the weather is calling for rain Saturday night.  From what I am hearing they do not have a tent, so it is unclear exactly how this is going to work.  Rain outs  in boxing are rare but that may be what we have Saturday.