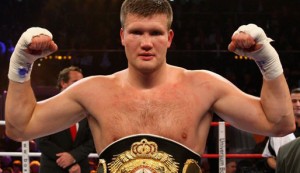 Somebody must have forgot to tell Germany that heavyweight boxing is dead.

After being home to the most important heavyweight fight card in a decade (Klitschko vs Haye), the country known for sausage and sauerkraut is showing the world that indeed heavyweight boxing is alive and well — at least in Germany.

This Saturday’s card, while not as historically significant as the Klitschko – Haye fiasco, is at least something that should be enjoyable for fight fans to watch. The card is packed with up-and-coming heavyweight hopefuls looking to make names for themselves to earn a crack at a Klitschko brother. If the division is ever to reach the glory days of the 1970s or the 1990s again (soon anyways), it will be because young, hungry contenders add intrigue to an otherwise completely one-sided demolition of  all comers by Wladimir and Vitali Klitschko.

The main event features once beaten Alexander Dimitrenko (31-1, 21 KOs) against popular rumbler Michael Sprott (36-16, 17 KOs). Dimitrenko is looking to solidify himself as a top contender in the division.  He has reeled off two knockout wins in a row since a majority decision loss to fellow high ranking contender Eddie Chambers.  Dimitrenko is taller, heavier and considerably younger than Sprott but he’s yet to show world-class skills to go along with his usual physical advantages. A win over Sprott could propel him closer to legit contender status and might even vault him to a rematch with Chambers.

Also on the card is oft-injured but undefeated heavyweight prospect Denis Boytsov (28-0, 23KOs).  Boystov will be facing unheralded American Mathew Greer (14-6, 13KOs). Boystov is an aggressive fighter who goes for the knockout just about any time the opportunity presents itself, but his career has been stalled somewhat due to reoccurring hand injuries. Greer shouldn’t provide much of a test for Boytsov other than confirming his hands are fully heeled and ready to go. Assuming they are, Boytsov’s continual progression would bolster and increasingly interesting stable of heavyweight contenders.

Former cruiserweight titlist Juan Carlos Gomez (49-2, 37 KOs) is continuing his campaign in the heavyweight ranks this Saturday as well.  He has won five fights in a row since being decimated by Vitali Klitsckho in 2009.   Gomez will take on the always game Darnell Wilson (23-12, 20 KOs) who has lost 7 of his last 8 bouts. While a win wouldn’t vault either fighter’s career into the stratosphere, it would keep them relevant in what many hope turns into an increasingly competitive heavyweight division.

Finally, Rakhim Chakhkiev (10-0, 8KOs) will take on Michael Simms (21-14, 13KOs) in a cruiserweight bout. The 28 year old Chakhkiev won the gold medal for Russia during the 2008 Olympics as a heavyweight and hopes to continue his march up the professional ranks. While not technically a heavyweight yet, Chakhkiev has the build and the pedigree to make some noise should he choose to make the trek north a division to heavyweight.