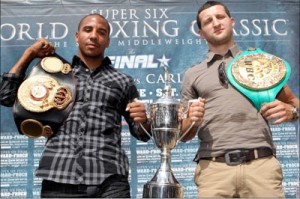 – The rematch between IBF bantamweight champion Abner Mares (22-0-1, 13 KOs) and former champion Joseph Agebko (28-3, 22 KOs) has been set for December 3, and will go head-to-head with the Cotto-Margarito II PPV. Mares won a controversial, foul-filled 12-round decision in August, prompting the IBF to order an immediate rematch.

– Boxingscene’s Alexey Sukachev is reporting a bout between former 3-division champion James Toney and top rated cruiserweight Denis Lebedev has been moved to November 4, and will be held at the Kodynka Ice Palace in Moscow, Russia. Lebedev knocked Roy Jones out in May, while Toney, who came in at a career-high 257 lbs., labored through a 10-round unanimous decision victory over Damon Reed in February.