This Friday Philadelphia will have a new promoter in town.  Brittany Rogers known as BAM (Brittany Anne Michele) at twenty-two years of age will become the youngest female promoter to stage a boxing card in the Unites States by having her first show at the National Guard Armory in Northeast Philadelphia.

Rogers’s father was an amateur boxer and she inherited his love for the sport.  She trained as a teenager at the Front Street Gym in Philadelphia and then developed an interest in the business side of the sport.  The Temple University student did a nine month internship at the Famed Blue Horizon where she began learning about promoting shows.  When the Blue closed, Rogers was introduced to Hall of Fame Promoter Russell Peltz and has been interning with Peltz Boxing since that time.

Rogers youth and enthusiasm will be a welcome addition to the Philly Boxing scene, which has seen less and less cards within the city limits the last few years, dropping to an all-time low with only five cards thus far in 2011.  Rogers told Philly Boxing History she plans to do at least six cards in the city next year.  The National Guard Armory will be configured to hold between 2,300-2,600 people for Friday’s card. 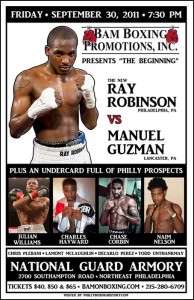 and both to highly touted prospects.  Robinson lost a close majority decision to Brad Solomon in 2009 and then lost a unanimous decision to Shawn Porter in 2010.  Now, Robinson looks to get back on track after a fourteen month layoff.

Robinson takes on Manuel Guzman who has lost bouts to Ronald Cruz, Sadam Ali, and Bayran Jargal.  Guzman does not have a pretty record but is known for providing a tough test to young talent.  Guzman may be starting to lose some of that tough edge though as he was stopped for the first two times in his career in his last two bouts.

In the co-feature, talented prospect Julian Williams 7-0-1 (4 KO) takes on Eberto Medina 5-6-1 (1 KO) in a six round Junior Middleweight bout. Williams was a decorated amateur with a 75-10 record and recently signed a promotional deal with Gary Shaw.