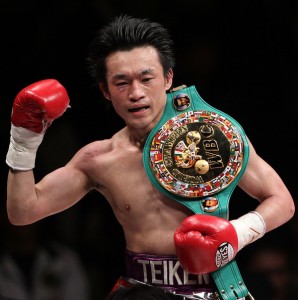 Nishioka (39-4-3, 24 KOs) stopped Rafael Marquez’s drive to become a world champion in three weight classes by taking a unanimous twelve round decision from the Mexican veteran in a close, competitive contest.

The 35-year-old southpaw from Tokyo fought at an even pace throughout, but seemed to step on the gas a bit after an eighth round accidental headbutt opened up a cut above his hairline.

Marquez, 36, fought well, but never let loose with a sustained offensive surge and, as a result, allowed for many close rounds that could’ve gone either way.

On the undercard, Roman “El Chocolatito” Gonzalez (30-0, 25 KOs), the 108 lb. WBA titlist from Nicaragua, stopped veteran former two-time world title challenger, Omar Soto (22-8-2, 15 KOs) in the second round of their scheduled twelve. The bout was originally scheduled to be a title defense for Gonzalez, but Soto came in 3.5 lbs. over the junior flyweight limit and was ineligible to challenge for the belt.

After a feeling-out round in the first, Gonzalez countered a body combination from his Mexican opponent and landed a straight right-left uppercut combination that put Soto down and out for the count.