It’s a slow news week in the fight game. The sport’s gone into one of its inter-event hibernations—indeed, even the hardcore fan is very hard-pressed to find something worth the discussion this week.

Which is why, thanks to my DVR, I cued up the fight on ESPN between Delvin Rodriguez and Pawel Wolak, still my choice for Fight of the Year, when they scrapped on July 15th in front of the Friday Night Fights faithful. Even before the majority draw was announced, everyone who 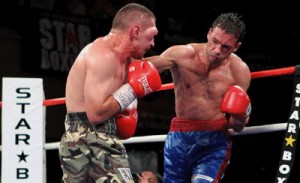 watched that fight was calling for a rematch. I said at the time that “this has the potential to be the greatest fight trilogy since Ward-Gatti, all they need to do is throw down two more times.”

Well, Wolak-Rodriguez II has been signed. On December 3rd the boxing world will get itself an early Christmas present, and it’s not out of the question that we’ll be seeing these two guys fight again next May or June either on FNF or on HBO. And if the next two fights are anything like the first one—and why wouldn’t they be, it’s not like Wolak is going to turn into Floyd Mayweather on us and start fighting defensively—it may not be premature to start talking about this trilogy’s place in the great series in the history of the sport.

The single greatest fight series of my lifetime (since 1977) was the Micky Ward-Arturo Gatti trilogy. I will not argue this. Unless Manny Pacquiao and Juan Manuel Marquez have their third fight end Rocky movie-style with a double knockdown causing a draw, unless Israel Vazquez and Rafael Marquez decide to fight one more time, this time to the death, or unless someone builds a time machine, keeps Desiree Washington away from Mike Tyson, and gives him three fights in his prime with Evander Holyfield, Ward-Gatti is the gold standard.

Folks a bit older than myself can recall Muhammad Ali’s three-fight Parkinson’s-inducing, punch-drunk death match with Joe Frazier. Amazingly, the second fight of that trilogy was for the NABF heavyweight title. NABF! The 70s were such a glorious time for the sport that even the minor titles, the stuff you see on Shobox and FNF these days, had Hall of Famers fighting for them, since George Foreman held the two major belts (oh yeah, there were only two major belts—the IBF hadn’t come along yet, much less the WBO) and Ali and Frazier had to get in line just like everyone else. For folks old enough to remember 1971-75, this would be their most likely choice for greatest ever series.

Unless, of course, you get the REAL old-timers, the guys who speak in reverential tones of the days when Clem McCarthy’s radio calls were how most Americans experienced sports of all stripes. Back then, boxers—even champions—fought so often that their annual won-lost records looked more like records of NFL football teams than binary computer code. When I wrote my Star Power PPV preview for this site, I mentioned that Saul Alvarez had fought 23 times in 3 years and treated that like it was an impressive feat; during a stretch between 1943 and 1945 Jake LaMotta fought over forty bouts against anyone they could stick a pair of trunks and some gloves on. Four of those fights were against the guy that even Ali called the greatest pound-for-pound fighter of all time (coining the term “pound-for-pound” in the process), Sugar Ray Robinson.

Consider that Robinson, had LaMotta not beaten him in their second fight, would’ve been undefeated in 131 pro fights before Randy Turpin got him for the middleweight championship of the world in 1951. That in itself would’ve been impressive enough, but those two guys fought an amazing six times! Sure, Robinson won five of them, but there wasn’t a bad bout in the bunch. Micky Ward and Arturo Gatti gave us three Fight of the Year-quality battles (and won two such awards, and then only because they fought twice in the same year). Imagine if they’d thrown down another three times at the same level of quality!

Yeah, it’s wishful thinking to want to compare Delvin Rodriguez and Pawel Wolak to LaMotta and Robinson and Ali and Frazier and even Ward and Gatti. But when December 3rd comes around and the bell rings and all of us hardcore fans have called up all our friends and ordered the pizza and bought the chips and beer and thrown a “you have GOT to see these guys fight” fight party, we’ve got a right to wish for two true warriors to put on a show that reminds the world that when boxing is done right, it is truly the greatest sport on Earth. No pressure, Delvin and Pawel. Just get in there and beat the crap out of each other. Don’t even worry about saving some for dessert. When you get your wits back about you we’ll talk about a third fight.

Fox Doucette covers Friday Night Fights for The Boxing Tribune. His weekly column, The Southpaw, appears on Thursdays. He wishes more guys fought like Micky Ward and Pawel Wolak. Fan mail, hate mail, and your choices for best boxing trilogies/series can be sent to beatcap@gmail.com.