Boxing is all about self-worth and realizing one’s potential against all the odds. There is more to boxing than just fighting someone else in the ring. It is a journey of self-exploration, pain, happiness, disappointments, and triumphs. Filmmakers tried to capture the real essence of boxing and the incredible struggles of boxers who rose on top of their agony and sufferings. … END_OF_DOCUMENT_TOKEN_TO_BE_REPLACED 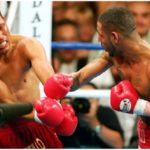 Over the years, I have seen literally thousands of fights and to name my top ten will do injustice to many others and I apologize for that up front. Still, I'll give it a go and list them in order of preference. Rightly or wrongly, I used the following criteria: I had to see them live or when they were first televised (no tapes, YOUTUBES, and/or videos), ebb and flow, sudden … END_OF_DOCUMENT_TOKEN_TO_BE_REPLACED 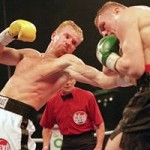 by Fox Doucette ...and the two men punched each other in the liver for 36 minutes, stopping only to sit in the corner and dispense entirely with the notion of water in favor of drinking vodka to take the edge off. When the fight ended, it was declared a draw not by the judges (who had since ascended to the gods, their lives satisfied and with nothing left on this earth to keep … END_OF_DOCUMENT_TOKEN_TO_BE_REPLACED

by Fox Doucette The two greatest junior welterweight fights of all time occurred twenty years apart. Aaron Pryor knocked out Alexis Arguello in the fourteenth round of a fifteen-round scheduled war in 1982; 20 years later, Micky Ward scored a majority decision over Arturo Gatti in the first of their three fights---Gatti would win the latter two fairly easily, but the first … END_OF_DOCUMENT_TOKEN_TO_BE_REPLACED 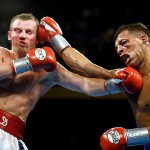 by Fox Doucette Arturo “Thunder” Gatti and “Irish” Micky Ward put on what is, for your columnist's money, the greatest fight of the twenty-first century so far; better than Corrales-Castillo, better than the Israel Vazquez-Rafael Marquez fights, better than Matthysse-Molina, and for damn sure better than the “Fight of the Century”, Mayweather-Pacquiao. Ward-Gatti I, on May 18, … END_OF_DOCUMENT_TOKEN_TO_BE_REPLACED