My first five were as follows:

Here are my next five:

6. Micky Ward vs. Arturo Gatti I (2002): Round 9— Both men engaged in non-stop action and withstood brutal punishment through 10 grueling rounds. After back and forth savagery, Ward dropped Gatti in the ninth round with a numbing and signature left hook to the body that made Gatti grimace in pain and help seal a majority but fair decision. I remember actually being scared that Gatti would die in the ring watching his head snap back so often. 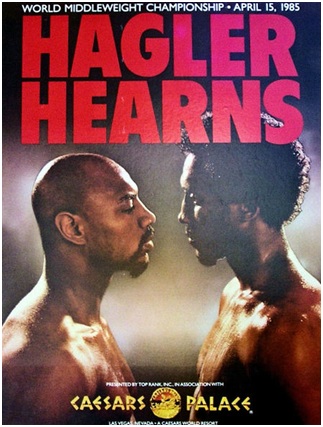 the opening bell Hagler rushed at Hearns eventually pinning him to the ropes. Hearns threw his devastating right hand to Hagler’s chin, stunning Hagler for a moment before Hagler was able to tie him up in a clinch. Seconds later, the two were trading power punches creating a war zone, with Hagler trying to get inside and to pin Hearns to the ropes again. In so doing, he stunned Hearns with a hard left hand. Hearns tied up Hagler again and tried to slow the pace by boxing rather than trading power punches with Hagler, who was still the aggressor. This did not last long, however, as the two again started to trade power punches. (During these exchanges Hearns reportedly broke his right hand).

The slugfest continued for the better part of the next two and a half minutes as both fighters traded heavy blows with little regard for defense. The granite-chin Hagler developed a cut on his forehead, but didn’t slow as he continued to pin Tommy to the ropes and meted out more punishment, eventually hurting Hearns at the end of the round. Sportscaster Barry Tompkins, doing the fight blow by blow broadcast for HBO’s version of the fight, yelled out “This is still only the first round!” as the fighters traded heavy shots at round’s end.

This opening round is considered by The Ring as the greatest round in boxing history, and won round of the year honors for 1985. In a subsequent HBO broadcast featuring both Hagler and Hearns in studio commenting on the fight, Hearns revealed “…that first round took everything I had, man…” When asked in the ring after the bout if he was hurt by Hearns’ first right hand, a blow that caused him to step back and then fall into a clinch, Hagler commented “…he definitely tried to put the bomb on me…he can punch…”.

Hearns foolishly and inexplicably received a massage before the fight. Trainer Emmanuel Steward stated that he felt the massage weakened Hearns’ legs during the fight and led him to adopt a more aggressive approach than he normally would have.

8. Juan “Kid” Meza vs. Jaime Garza (1984): Round 1– As the bell rang, Meza reached out to touch gloves, but Garza was having none of it and kept his hands up ready to fight. Clearly, there was no love lost, as there had been an altercation between the two at breakfast. They came out immediately winging and trading hooks. In this case, the old adage, “Never hook with a hooker” did not apply, for both fighters were deadly with this punch. After Garza missed with a right uppercut, a wide hook crashed off Meza’s temple and put him on the canvas for the very first time in his 47-fight career. With only 40 seconds into the fight, Garza had now demonstrated beyond any doubt the power of his blows. One of my friends jumped up and said, “Don’t move!” We were all standing and shouting, as was the live crowd. This is exactly what we expected and what we wanted.

The Kid looked around and then picked up the count, showing remarkable calm for a fighter who had never been floored. The heavy-handed Garza then charged in for the kill and drove Meza back toward the ropes, but the Kid responded with heavy shots that slowed him down. Garza continued to fire away with his all-offense, no-defense style and showed little respect for Meza’s punches. The Kid’s jabs found their mark through Garza’s defense, and the two began exchanging three- and four-punch flurries. The fight took on the aura of a cockfight, with back and forth winging. One could literally hear the swish sound when they missed and the thump sound when they connected. I was up and screaming, “End it, Jaime, end it! Take him out!”

CBS analyst Sugar Ray Leonard noted correctly that Garza was coming in with his hands low and kind of stumbled into the corner after missing a wild hook. When Meza went after him, Garza spun away and landed a cuffing hook that sent Meza to the canvas. Meza quickly arose and pointed his gloves toward the canvas to indicate he had been pushed. Referee LoBianco agreed and ruled it a slip. Garza then landed some jabs, but his speedy combos, launched with pure menace, missed. Meza’s were more accurate, marking an ever-so-subtle shift in his favor.

At that point, commentator Gil Clancy confirmed something we had all noticed and that was that Garza, the shorter of the two, could beat Meza to the punch since Meza was throwing wider shots. Then, just after Clancy made his point, it happened. Garza began to throw a counter hook after Meza missed with a short combo. Unfortunately (for him), he kept his right arm low, which created an opening. Meanwhile, Meza, by missing with his right dipped, was in excellent position to trigger his own hook. His blow was launched just before Garza’s. So here, in plain sight, was the spectacle of hooking with the hooker. We started screaming because we knew what had just occurred. Ready for a devastating result, we were not disappointed. Contravening Clancy’s observation, Meza had beaten Garza to the punch with shocking effect.

The perfectly leveraged hook struck Garza on the sweet point of his jaw, snapping his head violently to the side. His body twisted grotesquely and crashed hard, his head bouncing dangerously off the canvas. Garza’s eyes rolled back into his head. He was in bad shape but made a valiant effort to pull himself upright after rolling under the ropes. His effort was too little too late. Referee LoBianco reached the count of 10 a split-second before Garza fully regained his feet, but he would have been in no shape to continue. A new and jubilant champion had been crowned. This had been wham, bam, rock ’em and sock ’em!

9. Bill “Caveman” Lee vs. John LoCicero (1981): Round 5– In the suffocating July heat at the Twenty Grand Showrooms in Detroit, these two would give this short battle cult-like status. Al Bernstein said that the arena was sweltering hot and at times it felt like he himself was going to pass out, and that he could only imagine how the two fighters felt. LoCicero got decked early in the round, then got up and pummeled “The Caveman” with between 20 and 25 unanswered and savage shots until he got arm weary. Lee then regrouped and took over pummeling LoCicero until he, LoCicero, was knocked out in the same round. First LoCicero almost out, then Lee almost out, then LoCicero down and out! Like Meza-Garza but longer and both warriors arm weary.

One way to test whether someone is a serious boxing fan is to ask whether he or she knows the details surrounding this spine-tingler.

10. James Kirkland vs. Alfredo Angulo (2011): Round 1– This one happened so fast it caught most observers off guard. James “The Mandingo Warrior” Kirkland came back from an early first-round knockdown and subsequent early beating to turn the tables later in the round. Angulo launched over 100 punches but then grew arm weary allowing Kirkland to do the pummeling late in a round that featured mammoth swings and high drama. However, once the Mandingo Warrior got his mojo working, it was just a matter of time and in this case, the sixth round was when Perro got collared.

Here is what I said about it in an article on another site dated September 28, 2011, “If rumors out of Mexico materialize (and they are only rumors), boxing fans may be treated to a spectacular shootout on November 5 between light middleweights James “Mandingo Warrior” Kirkland (29-1) and Alfredo “Perro” Angulo (20-1) with ultra violence in the offing. I mean they could show this one on the Discovery Channel…this fight would be huge if it gets made. Both bring plenty of menace and action into the ring. It would be a throwback type of fight in the vein of Juan Meza vs. Jaime Garza or an all-action type like Brandon Rios vs. Urbano Antillon. Both are heavy handed, all-action, incoming pressure fighters and that spells K-N-O-C-K-O-U-T…If this fight happens, I have just two words of advice: Don’t blink!” As it turned out, it was all of that and maybe more.

The thing I enjoy most about these kinds of rankings is that you could mix them up in a hat and then lay them out and they still would make sense.
Can you add any to the list?