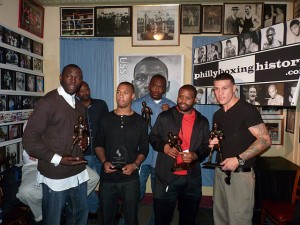 On Monday night Philly Boxing History hosted the fourth annual Briscoe awards for 2010.  The event is held at the Veteran Boxing Association (VBA) honoring the Philly fighter of the year, fight of the year, amateur of the year, and other special honors.  The show was well attended by fans, fighters, promoters, and boxing writers.  Everyone enjoyed the night of talking boxing along with eating and drinking the wide spread of Philly food and drink.

Along with the awards a special exhibit room was created to honor the award winners.  The VBA itself is a boxing exhibit with enough pictures and memorabilia on the walls to be considered a mini boxing museum. 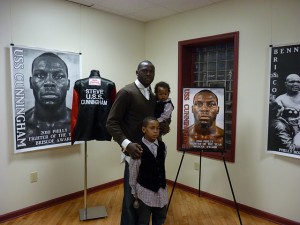 Steve Cunningham took home fighter of the year for 2010 in honor of his becoming a  two-time cruiserweight champ.  Cunningham defeated Troy Ross by fifth round TKO in 2010 to win the IBF title giving him the Briscoe over other candidates Danny Garcia, Mike Jones, and Derek Ennis.  Cunningham became the first fighter to win the Briscoe award twice.

Cunningham spoke about how this has been a difficult week.  Two weekends back Cunningham lost that IBF belt by controversial decision against Yoan Pablo Hernandez in Germany.  After being dropped in the first round, Cunningham rallied and appeared to have gained a lead on the scorecards when the fight was stopped on cuts to Hernandez from accidental head-butts.  The cuts did not seem bad enough to stop the fight.

The Briscoe winner stated that after what has been a tough week it felt great to be honored with the award.  He went on to state he is hungry and ready for a rematch which he hopes the IBF will order this week.  Cunningham stated that this decision in the Hernandez fight has made him that much more dedicated to gain back what he believes is his title.

Steve “USS” Cunningham also talked about how it felt to be honored at home.  He discussed the reality that he has to fight in Germany where they have a market for the cruiser division, but he loves to be recognized in his hometown. 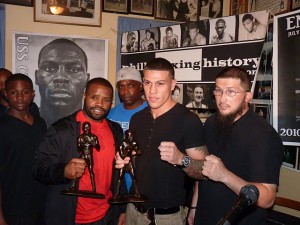 The inner city war on July 30, 2010 between Derek Ennis and Gabe Rosado was honored as the Philly fight of the year.  This was a no-brainer as the two Philly junior middleweight cruisers put on an action packed fight in front of a capacity crowd for the NABA title.  Ennis came away the winner by close decision but both fighters were honored with the Briscoe award for their efforts.

The fight continued a long tradition of Philly fighters who are friends from the gym, then wage war in the ring, but then are able to continue being close friends afterwards.  Many of these Philly fighters become close helping each other train for upcoming fights in the legendary Philly gym wars.  They are then asked to put aside friendship and go for real at times.  While it can be tough for friends to rumble they do their job and then go back to life when the fight is done. 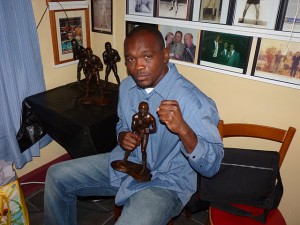 A special Briscoe was given to Dhafir Smith for Philly upset of the year.  Smith went into Jeff Lacy’s home territory in Florida to take on the former Olympian.  Smith was a heavy underdog but he dominated Lacy to win a wide unanimous decision to the surprise of everyone except Dhafir who had no doubt he could pull the upset.

Dhafir is a fan favorite in Philly and was thrilled to be honored for his big win in 2010.  He proudly talked about the upset and stated he has plenty more upsets in him for the future.  Smith is a classic tough guy, will travel fighter willing to take on anyone, anytime, anywhere. 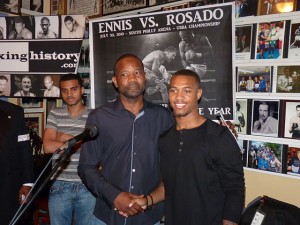 Also honored was Damon Allen with the Everett Brothers award for amateur of the year.  On hand were several members of the Everett family who have a long history of pro-fighters representing Philadelphia.

Overall it was a tremendous night for everyone involved, especially fans.  The event showed an aspect of boxing that still exists that has been lost in other sports.  While most modern sports figures who earn giant salaries have become distant to the fans that support them, boxing is still well known as a sport where the best athletes will mingle with the fans who watch them.  At any point tonight you looked out and saw past and current fighters sitting and talking 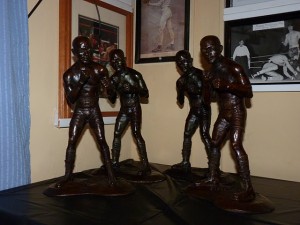 amongst fans.  Past great Jeff Chandler sat at the bar and chatted with fans.  Cunningham and other fighters ate and talked with the public as regular guys with humility rarely found in the modern athlete.

A great deal of credit goes to John Disanto of phillyboxinghistory.com.  John spends endless hours making this event happen.  He creates the posters, has the statues built, arranges the setting with the VBA, gathers sponsors, and so many other duties that it would take a separate article just to explain it all.  To top it off he does it all with sponsors and out of his own pocket so that the event is free to anyone who wants to attend (which includes a large spread of Philly food and free beer which the fans certainly enjoy).  Thanks for giving the proud fighting city of Philly and the fans a great chance to honor its past and current stars.

For a full array of photos from the nights festivities visit the following site.